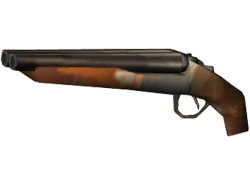 The Sawn-off Shotgun, also known as the Sawed-off Shotgun, is a weapon available in Grand Theft Auto: San Andreas, The Lost and Damned and Grand Theft Auto V. This gun is based on the Remington Spartan 100 with a shorter gun barrel and often a shorter or deleted stock. Compared to a standard shotgun, the sawed-off has a shorter effective range, but the more destructive power because of increased pellet velocity and wider spread cone means more collateral power. Its reduced size makes it easier to maneuver and conceal. Such a powerful and compact weapon is especially suitable for use in small spaces, such as by vehicle crews, and entry teams running through doorways. To make shotguns less concealable, many jurisdictions have a minimum legal length for shotgun barrels.

Despite being a shotgun, it is held like a pistol; the player can even sprint while holding it. It is double barreled and can only fire two shells before a rather lengthy reload. At hitman level, the player can dual wield it and fire four shells instead. With hitman skill and unlimited ammo, the sawn-off shotgun is almost as powerful as a rocket launcher, as it will blow up a car with about six shells and a helicopter with about 24.

The sawn-off shotgun can now be used while riding motorcycles (not driving cars) to perform drive-bys. It only holds two shells per reload and a short effective range, but it is very powerful. It is exclusive to The Lost and Damned and cannot be found in Grand Theft Auto IV, nor in The Ballad of Gay Tony. The sawn-off shotgun is so powerful at close ranges, it becomes very impractical and suicidal to hit people with cars or attempt drive-bys during multiplayer matches, especially if the auto-aim is turned on. While on a motorcycle, this can be used to instantly set a vehicle on fire by shooting the rear tires. This weapon is usually a 1 hit kill, but sometimes takes 2 hits.

The sawn-off shotgun appears now as a shortened pump-action shotgun. Just like in TLAD, it can only be used for drive-bys on bikes and buses.

Retrieved from ‘https://www.grandtheftwiki.com/index.php?title=Sawn-off_Shotgun&oldid=396668’
Categories:
Cookies help us deliver our services. By using our services, you agree to our use of cookies.