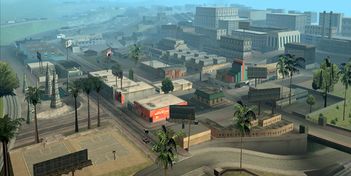 In Grand Theft Auto: San Andreas, East Los Santos is a stronghold for the Ballas gang, who use the area as a base to launch attacks on Grove Street Family gang members in Ganton. Conflict between the Ballas and Los Santos Vagos gangs does not occur in East Los Santos, due to the two gangs co-operating with each. Carl Johnson and Denise Robinson meet in East Los Santos during the mission Burning Desire. Carl had set on fire some homes owned by the Los Santos Vagos, however Carl rescued Denise from the fire after hearing her cries for help.

East Los Santos is also the main setting for the final mission of Grand Theft Auto: San Andreas: End of the Line. During this mission, Carl Johnson fights his way past Ballas, Los Santos Vagos, San Fierro Rifa and Russian Mafia gang members in order to reach Big Smoke, who he then kills. Frank Tenpenny then sets Smoke's Crack Palace on fire, leaving Carl having to fight his way back out of the building whilst also combating the flames. After escaping the building, which suffers a series of explosions as Carl escapes, Carl and Sweet chase Tenpenny through East Los Santos and other districts.

Los Santos (3D Universe)
Ballas
Los Santos Vagos
Grove Street Families
Retrieved from ‘https://www.grandtheftwiki.com/index.php?title=East_Los_Santos_in_GTA_III_Era&oldid=418126’
Category:
Cookies help us deliver our services. By using our services, you agree to our use of cookies.