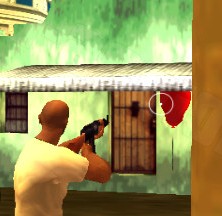 Victor about to burst a red balloon.

There are 99 red balloons across Vice City, which the player has to search for and burst with a gun. The player has to use manual aim for most of the balloons and some can be placed so high up that the player is forced to use a Sniper Rifle to get a decent aim. Each tenth burst (except for the last set, which has only nine) rewards the player a new weapon delivered to the back of the safehouses. A new feature in GTA Vice City Stories allows the player to keep a record of which red balloons have been burst.

Retrieved from ‘https://www.grandtheftwiki.com/index.php?title=Red_Balloons&oldid=352591’
Categories:
Cookies help us deliver our services. By using our services, you agree to our use of cookies.