Tarmac area of Francis International Airport in GTA III, the first airport to be included in a GTA game.

First included in the Grand Theft Auto III rendition of Liberty City, airports are a nigh-mandatory facet of large cities, primarily distinguished by their massive land use primarily for use as tarmac areas for parked airplanes and helicopters (static or interactive), and runways, with smaller areas occupied by airport terminals, hangars and car parks. With the exception of Grand Theft Auto: San Andreas and Grand Theft Auto Advance, planes may also be seen taking off and landing at the main runways. In addition to aircraft, many airport tarmacs are abundant with ramps and mobile staircases, making the area ideal for stunting. In nearly all cases, only the exterior of airports are accessible to the player; the only exceptions is the Escobar International Airport in Grand Theft Auto: Vice City and Grand Theft Auto: Vice City Stories, which main terminal building features a fairly detailed and explorable interior; at the cost of entering, the player must leave their weapons outside and may retrieve them after they exit.

Early in its existence in GTA III and GTA Vice City, the airport area is often criticized by both players and certain reviewers as "dead space" that take up too much of the city's total landmass due to the lack of activity within the airport area, especially the tarmacs and runways. Several attempts were made to rectify the problem, including the reduction airports size, more available controllable vehicles within the airport area, and the emphasis of airports being the safest locations to land aircrafts, especially large planes (i.e. the AT-400 and Andromada). Road traffic (originally consisting of Baggage Handlers) was also introduced in GTA Vice City to provide some semblance of activity, although this feature was only further implemented in GTA Vice City Stories and GTA IV (where conventional traffic vehicles may also be found within airport tarmacs). Improvements in detailing in GTA IV has also enhanced the presentation of its airport.

GTA IV's rendition of its airport is distinctive for being partially off limits to the player. If the player ventures into the tarmac area, the player will be awarded a 4-star wanted level. This is not apparent in the game's multi-player or Grand Theft Auto: Chinatown Wars, which shares the same city design. 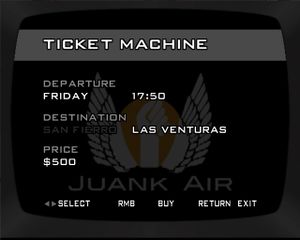 Purchasing a ticket at Los Santos International Airport for a flight in GTA San Andreas.

A feature exclusively found in GTA San Andreas is the ability to purchase tickets at an airport for commercial flights to other cities in San Andreas. Plane tickets, which cost several hundred dollars each, can be purchased at specific entrances of an airport. By confirming a purchase, the player will be shown a cut scene of an AT-400 taking off from the departing airport and flying to the chosen airport, before the player spawns outside the destination's airport; players can bail out from the plane at any time of the flight, or skip the cut scene.