For the stunt jumps required to gain completion of a game, see Unique Stunt Jumps. 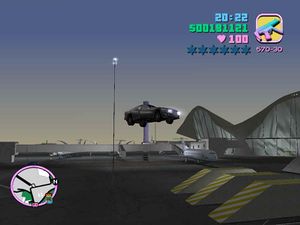 A stunt being performed in GTA Vice City.

A stunt is an unusual and difficult physical feat, or any act requiring a special skill, performed for artistic purposes. In the Grand Theft Auto series, since GTA III (2001), stunting is a popular pastime among the community, with feats usually involving various vehicles such as bikes, motorcycles and cars. Players who perform such acts are usually rewarded with an Insane Stunt Bonus, which is equal to a random amount of cash, depending on how insane the stunt is. In most Grand Theft Auto games, there are several variations of the stunt bonus.

In the original Grand Theft Auto insane stunt bonuses are similar to the Unique Stunt Jumps (which are featured in latter games) they can be performed with a fast car or a Superbike at specific locations only and then the player is rewarded with a fixed amount of money ($50,000). They can be found only in San Andreas.

There is the "Face Plant", which can only happen if the player is on a Bike. Then there is wheelie bonus, which can tell the player how far they travel on one wheel until they crash. If the player is in a vehicle, and if they achieve air time the game will tell the distance they went while in the air. Every time the player does a stunt, the game will reward the player with a cash bonus, but the amount received depends on which GTA game they are playing and the quality of the stunt.

In all GTA III Era games except all versions of GTA San Andreas and the PS2/PC/Xbox versions of GTA Vice City, the player is given a "Perfect Insane Stunt Bonus" if they make a clean stunt landing. They are given a cash bonus like normal, as well as distance, height, flips, and rotation, but they also receive the message "and what a great landing!".

Stunting still continues in the GTA IV era, now being more realistic with the games new physics engine. The game others better Vehicle damage and handling physics, which greatly increases the game play, with each stunt being different every time. One downside is that in the GTA IV era, it no longer has the in game text telling the player how long they where in the air or the distance of the stunt, and no cash bonus is given. This was most likely done to add more realism to the game, which was one of the goals Rockstar Games wanted for GTA IV.

Retrieved from ‘https://www.grandtheftwiki.com/index.php?title=Stunting&oldid=411042’
Categories:
Cookies help us deliver our services. By using our services, you agree to our use of cookies.