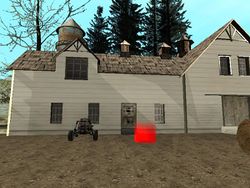 Helena Wankstein's Farm is a farm and home owned by Grand Theft Auto: San Andreas character Helena Wankstein. The farm is located at Flint Range in Flint County, San Andreas. The interior of the farm's buildings were removed alongside the "Hot Coffee" mini-game, which later caused controversy after an un-official modification was released. The interior can, however, be accessed through the Hidden Interior's Universe modification.

When dating Helena, special weapons spawn in her shed: