The Flamethrower in GTA III. 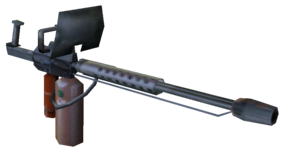 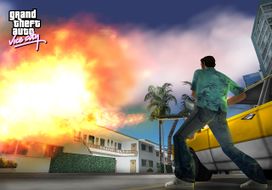 Tommy Vercetti using a flamethrower in a pre-release screenshot of GTA Vice City.

"Beware psychopaths and over-enthusiastic barbequers with this weapon. Fine for use in south-east Asia, but on the streets of Vice City, it is nothing but a menace.
-Vice City Bureau of Investigation file description.

The flamethrower can do damage over a large area. Any vehicles or pedestrians will be instantly set on fire within range. Most pedestrians usually die when lit on fire and only the healthiest car will survive the fire. Fire can be put out by the fire hose on a Firetruck or, in GTA San Andreas, with a Fire Extinguisher. Special vehicles that are fireproofed will be immune from damage from the flamethrower. It is one of the two only weapons that can destroy a Rhino, the other being Molotov Cocktail.

If you activate the flame thrower in front of a mirror, the fire will not show up on it.

Retrieved from ‘https://www.grandtheftwiki.com/index.php?title=Flamethrower&oldid=417381’
Categories:
Cookies help us deliver our services. By using our services, you agree to our use of cookies.