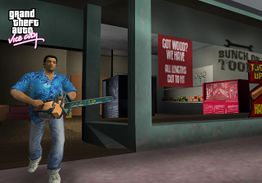 Tommy Vercetti wielding a Chainsaw in a pre-release screenshot of GTA Vice City. 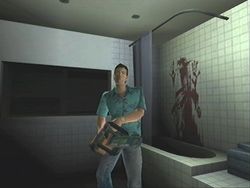 Tommy Vercetti holding a chainsaw. The bathroom where this chainsaw was found is homage to a scene in the film Scarface.

The Chainsaw is a portable mechanized saw commonly used as a tool for cutting down trees. Due to its intimidating noise and potential for mutilation, it is frequently employed as a weapon in pop culture, including in horror movies such as The Texas Chainsaw Massacre, violent crime films such as Scarface, and videogames such as Doom, Gear of War, Resident Evil, and The House of the Dead game series.

Revving a chainsaw in public will cause pedestrians to panic (if some are armed with a weapon, they may even retaliate against the player) or enemy gang members to attack the player, and, if a police officer is nearby the player will gain a one-star wanted level, regardless of whether the player harms anyone in the process, with the exception of GTA San Andreas.

The chainsaw can easily remove parts such as hoods, bumpers, and even doors from vehicles. However, its blows glance off vehicles' main chassis, thus causing only superficial damage. The chainsaw's ability to easily remove vehicle parts is a huge benefit in Paramedic missions, reducing the time the patients have to get in the ambulance. Strangely, chainsaws cannot saw off locked car doors, nor can they saw off doors of helicopters.

Retrieved from ‘https://www.grandtheftwiki.com/index.php?title=Chainsaw&oldid=414191’
Categories:
Cookies help us deliver our services. By using our services, you agree to our use of cookies.