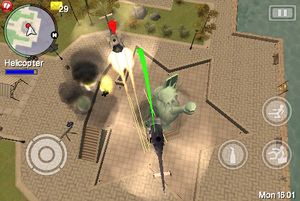 The battle between both kinds of helicopter from Slaying With Fire.

There are two types of helicopter featured in the game: one (dubbed the Defender) resembles the Police Maverick and is used by the LCPD, and one resembles the Sparrow. The LCPD variant features an minigun, firing rounds at five per second

These are the controls of the Helicopter in GTA Chinatown Wars: