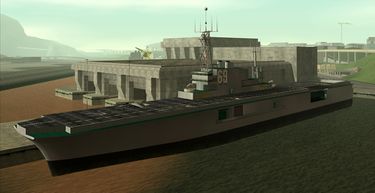 LHD-069 is an uncontrollable military amphibious assault ship featured in Grand Theft Auto: San Andreas. It is the first large-scale military ship to appear physically in a GTA game, and is docked at the Easter Basin Naval Station in Easter Basin, San Fierro.

Accessible areas aboard LHD-069 include the flight deck and two internal decks; players do not have access to interiors of the upper levels of the ship's superstructure.

The flight deck is actually capable of functioning as a short takeoff and landing strip for nearly any plane; in addition to the superstructure, two SAM sites are installed there, while a Hydra will also spawn occasionally at the same level after completion of the mission "Vertical Bird". The below decks resemble warehouses, with crates and explosive military armaments (which obviously explode when shot at, similar to explosive barrels) scattered and stacked around the area. Large loadings bays on the upper below deck and a wet dock in the lower below deck are also incorporated into the ship, although both the loadings bays are only functional and the rear door separating the wet dock with open waters opened during "Vertical Bird".

The only time the player will be able to visit the ship fully is during "Vertical Bird" by Mike Toreno, this also being the only time when military personnel is present in the ship. With its rear cargo door opened exclusive during the mission, the player is required to infiltrate the ship through the wet dock and fight/sneak their way up the ship, use a loading bay to lift a Hydra onto the flight deck, and fly away on the plane.

Retrieved from ‘https://www.grandtheftwiki.com/index.php?title=LHD-069&oldid=418259’
Categories:
Cookies help us deliver our services. By using our services, you agree to our use of cookies.