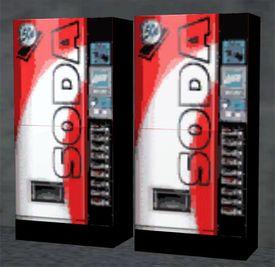 With the advent of fully 3D environments in GTA III and GTA Vice City, vending machines were added as static, non-interactive props that decorate specific interiors in the game.

Vending machines in GTA III were originally designed with a red-and-white frontage and a "SODA" caption; while this clearly indicates it sells beverages, the vending machine also depicts a candy bar on the upper left corner that can be purchased for "50 cents", implying that it also offers snacks. The texture of this vending machines was eventually reused in functional vending machines in GTA San Andreas, with its mention of snacks still intact. GTA Vice City also features a redesigned vending machines bearing the Sprunk name, one of the first in the series to feature an in-universe brand name.

In GTA IV, the player can also restore portions of their health by feeding $1 into any Sprunk or eCola vending machine. The player character will pick up the can, drink it then throw it on the ground.

Although snack vending machines do appear in Grand Theft Auto IV, they are not interactive to the player. Similarly, coffee machines debut in the game, particularly appearing within the interiors of the Schottler Medical Center and Westdyke Memorial Hospital, but are once again non-interactive.

Retrieved from ‘https://www.grandtheftwiki.com/index.php?title=Vending_Machines&oldid=366597’
Categories:
Cookies help us deliver our services. By using our services, you agree to our use of cookies.