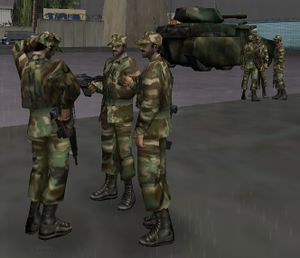 Members of the military and a Rhino at Fort Baxter Air Base.

The Military in GTA games are the armed forces of the USA, comprising mostly of the Army, Navy, Air Force, Marine Corps and Coast Guard. The military themselves don't appear in Grand Theft Auto IV, because it enhances realism - the military would not be sent to kill one person, and because the Posse Comitatus Act prohibits the use of federal military personnel and units of the National Guard under federal authority from acting in a law enforcement capacity within the United States, except where expressly authorized by the Constitution or Congress[1]. The army is replaced somewhat by NOOSE. The military is also important in many missions throughout the series, such as Sir, Yes Sir!, Black Project, Green Goo, Up, Up and Away!, Vertical Bird and Over the Top. As seen in the Grand Theft Auto Online gameplay trailer, the US Army is present in GTA V, identifiable by their UCP camouflage fatigues. 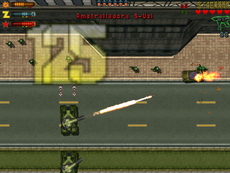 In Grand Theft Auto 2, the Army is responsible for eliminating any threat that is in the city and only appears from the six-star search. The soldiers are armed with machine guns and shots can kill the hero and destroy cars. The military uses different vehicles as the Barracks OL or Rhino. The military has its base in residential districts, but the base is totally inaccessible, but there are a small base in the Industrial District to which the mission can be accessed at Army Base Alert!.

After the player gains six stars in a GTA III Era game, the army will begin to chase the player. On the ground, two military vehicles are used to kill the player; the Barracks OL, which is used for troop transport, and the Rhino tank. The soldiers themselves are always well armed with weapons that will often make short work of the player and most vehicles.

Members of the military behave as a gang in Vice City and will attack the player or any other gang (except for the Vercetti Gang) if spotted on military territory, unless in a Cop uniform (applies to the player only). They will also set up roadblocks composed of the Barracks OL with soldiers armed with M16s in GTA III, although they also drop Pistols and Grenades when killed; the military uses M4s (in Fort Baxter Air Base and the Cop Land mission) and MP5s (during a 6-star wanted level) in GTA Vice City, GTA Liberty City Stories, and GTA Vice City Stories; they use M4 Carbines in every other GTA III Era game. These aren't as lethal as those of the FBI since there could be two FBI vehicles taking up one road with at least eight agents. But seeing as how the Barracks takes up the space of one road they can be broken through although their weapons will still pose an extreme threat.

Behavior as a Gang

Soldiers at the Fort Baxter Air Base congregate and move in groups. Except if the player is wearing a police uniform or Army Fatigues, they are ordinarily hostile to the player and will attack, regardless of whether or not the "Pedestrians Riot" or "Pedestrians Hate You" cheats are active.

Soldiers at the Fort Baxter Air Base will attack or be attacked by PIGs that happen to be in the area of the air base. Likewise, Fort Baxter soldiers will shoot and kill any other gang members they see, usually Cubans that have been left over from a nearby Rampage (although the player can modify the pedgrp.dat to add gang members to the airport area; they just have to put gangs into both airport groups: "airport" and "airport night"). Furthermore, the Fort Baxter Air Base soldiers are frequently in conflict with the PIGs over turf; police act against both parties when gun battles occur. In addition, policemen will pursue and kill Fort Baxter soldiers in the same manner as they do with gang members and street criminals, allowing the player to attain "Good Citizen Bonuses" worth $50 for each punch/kick/attack delivered to a fleeing Fort Baxter soldier. Player must be very careful though, as the soldier (or any nearby soldiers) may attack the player with an M4. Also, accidentally hitting the cop or other soldiers will give the player a one star wanted level, killing the cop will give the player two. Strange enough, when a policeman attacks a Fort Baxter soldier, the soldier never fights back; instead, he continues to run away. Also, what's interesting is that soldiers will never fight the Vercetti Gang except when provoked, even though the soldiers are ordinarily hostile to the Vercetti Gang's leader.

The Military appears in Grand Theft Auto V, and are stationed at Fort Zancudo, a joint Army/Air Force base. They do not take part in the Wanted system unless the player enters the military base or its airspace.

Army of the Republika Srpska

Retrieved from ‘https://www.grandtheftwiki.com/index.php?title=Military&oldid=412119’
Categories:
Cookies help us deliver our services. By using our services, you agree to our use of cookies.