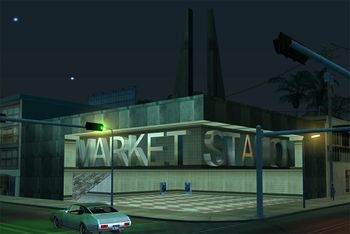 Market Station is part of the Brown Streak Railroad line, servicing the western portion of Los Santos, in the Market district, adjacent to southern Vinewood, and just across the street from InterGlobal Films. It stands as the only underground transit station in the entire state of San Andreas, and is one of the two rail stations in Los Santos, the other being Unity Station in El Corona, which is modeled after Union Station in Downtown Los Angeles. Market Station, however, might be modeled after a station on the Metro Red Line.

The station is relatively simplistic in design, consisting of a radically designed vestibule that leads underground to the platform level, which only side platform services one side of the tracks only. Regardless, trains from both directions tend to stop on the platform side.

The station is prominently featured in "Snail Trail" as the station where a witness the player is instructed to follow disembarks from a train from Cranberry Station in San Fierro and hails a taxi to continue his trip to the meetup point with a newspaper reporter in Los Santos.

Retrieved from ‘https://www.grandtheftwiki.com/index.php?title=Market_Station&oldid=372927’
Categories:
Cookies help us deliver our services. By using our services, you agree to our use of cookies.