An advert, found in San Fierro.

The Brown Streak Railroad is a combination of passenger and freight rail operating within the San Andreas. It is most likely named after the Silver Streak Railroad. The name could also be a reference to a brown spot of feces on the underwear due to inadequate wiping of the buttocks. The service is based off of California commuter railroads such as Caltrain and Metrolink.

The passenger train is the Brown Streak, usually operating 24 hours a day with one locomotive and two passenger cars, with a rare three-car set; these locomotives are based on the EMD F40PH and the cars are based off of Amtrak Superliners. The freight train consists of a locomotive and three or four flatcars, and is based on the EMD SD40-2. All locomotives are diesel powered, with no electrified tracks. The player also has the option of riding in passenger trains (at no charge), with the ability to de-train at any stop, or in between, if preferred.

Trains are totally indestructible. It is impossible to damage a train by any normal means, even attacking it with a Rhino. It is, however, possible to derail a train. This is done by hijacking the train and accelerating it until the train leaves the tracks, usually done while taking a turn too quickly. At this point the main locomotive will break apart from the cars and will slide until it finally comes to rest. If the player was in the process of a train mission, that mission is now considered a failure.

As in Grand Theft Auto 1, the player may hijack passenger (Brown Streak) and freight trains arriving at the station. While driving these trains, the player also has the option (assuming the entire map has been unlocked) of engaging in cargo missions, which require making deliveries to all the stops in San Andreas within the given time limits. A small reward is given after each successful stop, and a large reward is given after two complete loops of the state (mission levels 1 and 2). If one has successfully completed the freight train sub-missions, the player can take train rides free of charge. 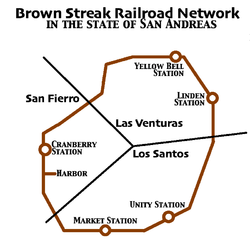 The Brown Streak Railroad runs a full circuit throughout the entire state of San Andreas, with two tracks providing service. At two points, the rails combine into a single track and run for a couple of miles before parting back into two tracks. In Los Santos, a track connects to the main circuit and is a more industrial line. This line cannot be driven on in the game and is merely for show. In San Fierro, a track connects to the main line and leads to the docks in Easter Basin. This is also an unusable track, although a path file for it exists within the game's programming. In general, all trains use the inner track, with a few exceptions: during the Introductory Mission, Wrong Side of the Tracks and Snail Trail.

There are several Railroad Crossings all around the state of San Andreas. The crossings have red flashing lights and barriers that come down when a train approaches, except in Los Santos where all but three crossings, two of which are on the unused freight depot siding, have no alarm systems at all. Depending on the speed of the approaching train, the barriers may not be fully down by the time the train gets there, causing players to drive through and getting hit by the train, which usually causes cars to explode and kill you. Pedestrians still walk across the crossings regardless if the barrier is down, and if the barrier is down for more than fifteen seconds the cars will drive through the barrier anyway (causing it to fall off).

Trains will usually depart within thirty seconds of arriving on a station platform. Trains can also be spotted en route between stations.

Retrieved from ‘https://www.grandtheftwiki.com/index.php?title=Brown_Streak_Railroad&oldid=416261’
Categories:
Cookies help us deliver our services. By using our services, you agree to our use of cookies.