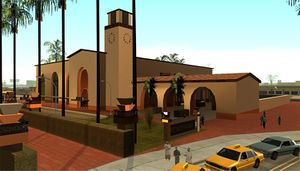 The exterior of Unity Station in Los Santos, San Andreas

Located on the northwestern corner of El Corona in southern Los Santos, Unity Station is one of two railway stations in Los Santos that is served by the Brown Streak Railroad (alongside Market Station), based along the main line that runs from east to west and located just outside the west end of a tunnel from Flint County that passes Market Station. Its parking lot and surrounding pedestrian malls are controlled by Varrios Los Aztecas.

The station itself is grand in appearance, with a large but inaccessible terminal building on the north side of the tracks and a well designed layout. The station has two platforms on a branching off the mainline, one of which leading to a depot, and two running from east to west on the main line. Both platforms are linked via an underground tunnel on the western end of the station grounds, and the station building's western side features shelter and a hedged plaza. Only the southern platform is sheltered.

The player can replenish their health or eliminate hunger at Sprunk vending machines around Unity Station, and an MP5 pickup also spawns at the station.

Unity Station, by name and appearance, is seemingly based on Union Station in Los Angeles.

Unity Station also plays a role in the mission "Wrong Side of the Tracks", where Los Santos Vagos and San Fierro Rifa gang members take part in a narcotics exchange, before being interrupted and chased by Carl and Big Smoke. The station is also featured during "Los Desperados", when Carl and Cesar meet up with Cesar's gang to reclaim their territory. 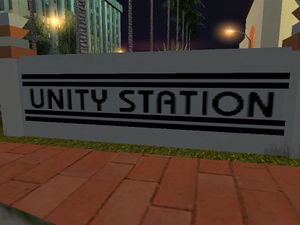 Retrieved from ‘https://www.grandtheftwiki.com/index.php?title=Unity_Station&oldid=418128’
Categories:
Cookies help us deliver our services. By using our services, you agree to our use of cookies.