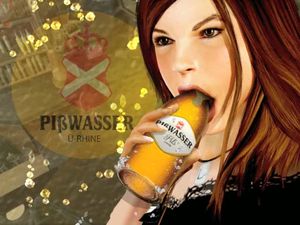 Pißwasser (mispronounced in-game as "pisswasser"; the correct pronunciation is actually "pissvasser") is a fictional German export lager frequently advertised in Grand Theft Auto IV and Grand Theft Auto V. 'Wasser' in the beer's name translates into English as 'water', making the beverage's literal name 'piss water', which is a slang term for cheap, watered-down beer. Billboards seen in-game expand the urine references, even going so far as to suggest the bottles contain nothing but urine (perhaps in reference to the urine in Corona beer rumor). Furthermore, the television ad has labeled the brand with the words 'Ü-Rhine', which is probably also a nod to the Rhine river in Germany (also a pun on "urine"). The labels on the bottles are similar to Grafenwalder's labeling. The beer's slogan is "You're In, For A Good Time", once again playing to the urine theme.

The radio and TV advertisements for the beer feature variations of a song sung by a stereotypical redneck man with lyrics that portray comically exaggerated effects of alcoholism, including "giving a dude head" and "driving drunk off a pier". A pack of Pißwasser costs 6 dollars at 24/7.

Some webmasters have received a six-crate Pißwasser from Rockstar[1], one notably to UK website ComputerAndVideoGames.com[2].

A Pißwasser bottle, and the M-60 were both weapons used in the deaths of a protagonist.

Last night, I think I shit the bed,
Got so drunk, I gave a dude head,
Life is just a merciful blur,
When you pop a Pißwasser.

Pißwasser, don't drink it slow,
3 a.m., buy some blow,
Sleep in the bathroom on the floor,
What really matters anymore?

All the crap you do all day,
Who fucking cares anyway?!

Pißwasser, this is beer!
Drive drunk off a pier!
Pißwasser, drink all day!
It helps your troubles go away, yeah yeah!

You work your nuts off everyday,
A proud American all the way.
Life is just a merciful blur,
When you pop a Pißwasser.

Pißwasser, this is beer!
Drive drunk off a pier!
I love drinking all day long,
I beat my girlfriend while I sing this song.

Retrieved from ‘https://www.grandtheftwiki.com/index.php?title=Pißwasser&oldid=402716’
Categories:
Cookies help us deliver our services. By using our services, you agree to our use of cookies.