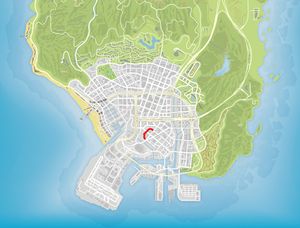 A map showing the location of Forum Dr in GTA V and GTA Online.

The protagonist of GTA Online returns to Forum Dr to give Gerald G. drugs they had stolen during Deal Breaker, Death Metal, Dish the Dirt, Flood in the LS River, Gassed Up, Pier Pressure, Violent Duct and War and Pieces. They also return Stanley to Gerald's apartment during No Hay Bronca.

During the mission Franklin and Lamar, Franklin drives Lamar Davis back to Forum Dr. The missions Chop, The Long Stretch and Hood Safari (which also includes Trevor Philips) all begin outside his home, while Franklin and Lamar release Ballas gangster D on Forum Dr after kidnapping him during the mission Chop. After this, Chop moves in with Franklin and Denise to avoid him being harmed if the Ballas want revenge. Franklin drives Lamar to Forum Dr, after rescuing him from the Ballas, and then meets corrupt FIB agents Steve Haines and Dave Norton, who ask Franklin to kill Trevor Philips.

Retrieved from ‘https://www.grandtheftwiki.com/index.php?title=Forum_Dr&oldid=416409’
Category:
Cookies help us deliver our services. By using our services, you agree to our use of cookies.