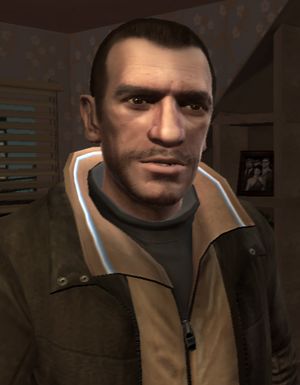 Niko Bellic the protagonist of the game.

This page details the main points of the plot of Grand Theft Auto IV. For the entire plot, you must read each mission article separately.

The protagonist of Grand Theft Auto IV is Niko Bellic, an Eastern European. In the very first cutscene, Niko is with a friend on a ship, the Platypus, preparing to dock at Liberty City. After Niko's friend, Hossan (later a Random Character), says that he would like to stay in Liberty city, and live the dream, Niko explains that his cousin, Roman Bellic, is already living the American dream.

When Niko meets Roman, it turns out that he isn't living the dream at all. In fact, he is at the bottom of what he calls the food chain. Roman insists that he will become rich some day, and all he need is one man, one good man. He believes that this man is Niko. It turns out that Niko has his own problems. Niko starts to tell his story, but Roman fall to sleep. All that Niko gets to say is, "During the war, we did some bad things, and bad things happened to us. War, is where the young and stupid are tricked by the old and bitter into killing each other. And I was very young, and very angry. Maybe that is no excuse". He also mentions the two things that brought him to Liberty City, but does not elaborate.

When Niko goes to meet Roman at his taxi depot, he meets Roman's girlfriend, Mallorie Bardas, and one of his loan sharks, Vladimir Glebov. Vlad seems to be interested in Mallorie. Vlad also hates Niko staring at him.

Niko runs a few errands for Roman while he settles into the city. This involves saving Roman from some loan sharks that are beating him up. The player learns that Niko had his own loan shark back in the old country. Rodislav Bulgarin, he had too many connections, Niko had to flee. It is one of the reasons that Niko came to Liberty City.

Niko picks up a friend of Roman's, named Little Jacob. He also picks up Mallorie and one of her friends, Michelle. Niko and Michelle go on a date. Niko takes her to the fun fair, but it is closed. They go bowling instead. On dates, Michelle won't tell anything about her life, or past, and Niko can't tell her about his criminal life either. Michelle says she's new in Liberty City, yet she seems to know a lot about the place.

Niko ends up doing work for Vlad, as a way for Roman to pay off his debt. Vlad calls Niko a peasant, and treats him like one. He also has a lot of suspicious calls to Mallorie.

Eventually, Roman begins to expect that Mallorie is cheating with Vlad. When he finds out that Niko already had his suspicions, he is angry, and questions Niko's loyalty. Niko proves his loyalty by killing Vlad, right in front of Roman.

After killing Vlad, Niko tells Roman the second of the two reasons that he is in Liberty City. In the war, his unit, of fifteen people was ambushed. It was a setup, for money. Someone from the unit gave them up. 12 died, three survived. Niko knows that he is not the betrayer; he has spent the past ten years looking for the other two. Florian Cravic, and Darko Brevic. One of them lives in Liberty City.

Niko and Roman need money. Niko ends up working for two of Roman's friends, Little Jacob, and Brucie Kibbutz. He develops good friendships with both.

Vlad's boss, Mikhail Faustin is angry that Niko killed Vlad. He has his men kidnap Niko and Roman. Faustin asks Niko if he thinks its okay to kill his employees. Niko replies, "If he's an a**hole, then yes". Faustin agrees, kills the kidnapper of Niko and Roman, and says that he only kept Vlad around for his sister. Faustin decides that Niko has to work for him, to make it up to him.

Faustin is on drugs, and drinks. His best friend, Dimitri Rascalov can't talk any sense into him. He has Niko kill many people, including Lenny Petrovic, the son of the very powerful Russian gangster, Kenny Petrovic, which leaves Mikhail, Dimitri and Niko in trouble. Dimitri sees this and negotiates with the Petrovic Family behind Mikhail's back. The Petrovics agree to lay off on one condition: Faustin must die; Dimitri cannot run because he says "no matter where you go, people will find you" so he is left with no choice. Dimitri tells Niko that he told Petrovic that Niko was a hired gun, so Petrovic agreed he would be spared, if Niko was the one to kill Faustin. Niko kills Faustin, and after a short period of time goes to collect his payment from Dimitri accompanied by Little Jacob (Jacob suspects Dimitri).

When Niko arrives at the warehouse appointed for the meet, Dimitri reveals he is working with Rodislav Bulgarin, the loan shark that Niko told Roman about earlier. The killing of Faustin was a set up so that Dimitri could take over the Faustin Family and Russian Mafia. Dimitri offered Niko to Bulgarin for free. As a show of loyalty, Bulgarin's men appear and open fire on Niko. Dimitri and Bulgarin leave the meet when Little Jacob joins the fight and helps Niko eliminate the men. When they finish off the men, the two escape the warehouse and the police attention that's waiting for them outside.

Niko goes to pick up Roman and tell him about the situation. Roman says that they should move to Mallorie's flat in Bohan, to escape Dimitri's manhunt. They go to Roman's apartment to collect some stuff, where they find that Dimitri has had the safehouse and Roman's taxi depot burnt down; this greatly upsets Roman, launching him into a fit of rage. Partly because he had worked hard for the depot and the apartment, partly because he had had an engagement ring in the apartment so he could propose to Mallorie.

In Elizabeta's penultimate mission Niko must retrieve some cocaine for Elizabeta, that some friends of Little Jacob's stole, from an old hospital on Colony Island. After retrieving the cocaine, Niko meets Jacob in a Bohan alleyway where Niko's girlfriend Michelle appears and confiscates the cocaine. Michelle, or Karen has been working undercover for a shady government agency , (known to the civilian population as United Liberty Paper), an agency that wants Niko has to work for. Niko has no choice in this, if he refuses, his file, containing all of his crimes, will be handed over to the authorities and he will be prosecuted. But in addition to Niko's retaining his innocence, the agency will help Niko find the traitor who gave Niko and his unit up for money. Niko is reasonably happy with his current situation until Roman is kidnapped by gangsters he owes money to and is offered to Dimitri as bait to draw out Niko. Niko rescues his cousin, then Roman begs Niko to forget about Dimitri. Niko agrees, as long as Roman will not try to talk him out of finding Florian Cravic and Darko Brevic. Roman agrees and goes on to spend a the proceeds of the old taxi depots insurance on a new luxury apartment in Algonquin and a fleet of new Cavalcade taxis.

Niko also begins working for Francis McReary, and Playboy X. Playboy introduces Niko to Dwayne Forge who Playboy pays Niko to be friends with (as he doesn't want to be seen with his old mentor), and the player eventually has a choice to kill Playboy, or Dwayne. Niko begins to work for Francis McReary when Francis blackmail Niko with evidence on his previous crimes (though this may be a bluff as the government agency Niko previously worked for promises to keep Niko's crimes under wraps). Niko also works for, and builds a good friendship with Patrick McReary (or 'Packie' as he is known). That also stems out to his brothers, Gerald McReary and Derrick McReary, as well as a relationship with their sister, Kate McReary. Eventually, Francis finds out that Derrick is back in town and begins to worry. He knows that Derrick knows Francis is crooked and tells Niko to kill Derrick. Then Derrick calls Niko and asks him to kill Francis, as he fears for his safety. The player gets a choice, kill Francis, or Derrick.

Packie introduces Niko to Ray Boccino. Niko does a lot of errands for Ray, who doesn't pay very well. Eventually Niko threatens to leave if Ray doesn't help find the man that Niko is looking for. Ray agrees to help, he finds a man that knows Florian. Niko threatens the man to lead him back to Florian, when he gets inside it turns out that Florian was not the one who betrayed them. He came to Liberty city and changed his name to Bernie Crane.

As Crane was not the betrayer, the search continues. Niko eventually end up working for Bernie, who Dimitri is blackmailing. Niko also ends up working for Phil Bell, an associate of Ray's, and their boss, Jimmy Pegorino. Niko does alot of work for the Pegorino Family. Mostly about building the Pegorino name.

Niko gets a call from Mallorie, Roman proposed. He also told her that he was the one who killed Vlad.

Eventually Niko gets a call from the contact of that crooked organisation that Michelle (or "Karen") works for. He has a friend. Jon Gravelli is the leader of the Gambetti Family. He can help Niko find Darko, if Niko does some work for him. Niko does alot of work for Gravelli. After a few missions, Niko gets a call. Darko has been brought into Liberty City.

Niko and Roman go to the airport. A van drives past and drops Darko out the back, and then it drives off. Niko finds out that Darko set them up for only $1000. Darko is a drug addict who has had a very bad life. He says thank you to Niko for killing him. The player gets a choice. If the player kills Darko, Niko puts 12 bullets into him, one for each friend who died, and then he leaves not feeling any better. If the player spares him, Niko feels better, knowing that living was the best punishment for Darko.

From this point forward, the player makes a decision to determine which of the two dramatically different endings is played. For full details on the background, decision, last missions and both endings, see GTA IV Endings.