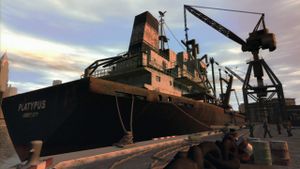 The ship docked in East Hook.

The Platypus is a non controllable cargo ship in Grand Theft Auto IV.

The Platypus was involved in smuggling operations, including diamonds, heroin and sports cars, and was most prominently a vessel in which Niko Bellic served as a crew-member for several months, along with Hossan Ramzy, before disembarking at Liberty City. When the ship docks at East Hook, Liberty City, as Niko leaves, the ship is carrying immigrants from across the world, including Greece, Russia, Egypt, Thailand, China and Serbia.

According to news reports, the captain and entire crew of the Platypus disappeared shortly after the ship docked and the passengers disembarked. One of the crew was found in the Humboldt River with whip scars on his back - apparently the man who was engaging in sado-masochism with a woman as the ship was docking. The ship remains docked in Broker throughout the game and, if Niko chooses to exact his revenge on Dimitri Rascalov, is the setting for A Dish Served Cold, suggesting Dimitri intended to steal it and escape America. After this he calls Roman to tell him that "it ended where it began".

The diamonds that interweave between the main stories of Grand Theft Auto IV, The Lost and Damned and The Ballad of Gay Tony came from the Platypus when Anthony Prince attempted to purchase them from one of the ship's crew, the cook. When the deal was done, Johnny Klebitz and The Lost Brotherhood ambushed the deal and stole the diamonds for Ray Boccino during this, Johnny ends up killing Tony's boyfriend Evan Moss.

The Platypus is also included in the Bomb Da Base II mode of GTA IV's multiplayer. After stealing a Securicar loaded with explosives, online players playing as Petrovic Family gangsters fly a chopper to the Platypus. Arriving at the Platypus, a heavy gun battle begins between the Albanians and the players. This is similar to the Revenge mission, however the Platypus ship is now under control of the Albanians. Two bombs must be planted on either the upper or lower levels of the ship while gunning down Albanians. The multiplayer team must then escape the ship before the explosion.

If the multiplayer storyline is canon with the campaign, that would mean the Platypus is no more.

Retrieved from ‘https://www.grandtheftwiki.com/index.php?title=Platypus&oldid=403890’
Categories:
Cookies help us deliver our services. By using our services, you agree to our use of cookies.