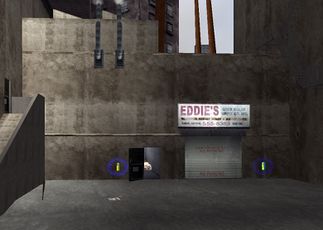 View of the Portland hideout in GTA III from the entrance.

The Portland Hideout in Grand Theft Auto III is the first place the player can save at.

The hideout is situated in a backalley in the Red Light District, Portland, consisting of one rudimentary living space (depicted being equipped with a bed, stove, washing machine, microwave and television, and a garage capable of containing up to one moderately sized vehicle). Awarded police bribes, a health pickup, an adrenaline pill, as well as pickups attained by collecting hidden packages are usually sorted within the backalley. In addition, completion of "Big'n'Veiny" from El Burro will result in the hideout appearing with stacks of bestiality pornography magazines (presumably a gift from El Burro).

Based on the sign hung over its garage, the hideout is associated with one "Eddie". Upon escaping police custody, Claude and 8-Ball use this place to "lay low" during "Give Me Liberty". In Grand Theft Auto: Liberty City Stories, a hidden package is found behind a couple of trashcans next to the hideout's door.

Retrieved from ‘https://www.grandtheftwiki.com/index.php?title=Portland_Hideout&oldid=351565’
Categories:
Cookies help us deliver our services. By using our services, you agree to our use of cookies.