Unlocked after "Nines and AKs", Sub Urban is one of three clothing stores initially made available in the game (alongside Binco and ProLaps). Presumably marketing to those interested in modern urbanwear, the store's interior is decorated in a gritty urban theme, and even features a stage, which use is unknown.

There are three Sub Urban outlets in the state, each based in the following locations: 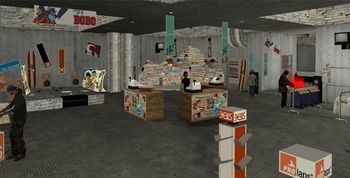 Sub Urban may be considered a lower-mid range clothing outlet, and like Binco, specializes in generic attire or urbanwear popular among street gangs. However, items on offer in the store generally cost more than those in Binco, though they are still priced reasonably as most of them still cost below $100.

Retrieved from ‘https://www.grandtheftwiki.com/index.php?title=Sub_Urban&oldid=397243’
Categories:
Cookies help us deliver our services. By using our services, you agree to our use of cookies.