Available after completion of the mission "Nines and AKs", there are four Binco stores located all over San Andreas:

Binco is not based on any specific real-life store, though it may be either a thrift store or clothing exchange store like Plato's Closet or Ross. This could possibly explain the signs in the store which read "Everything 99¢", despite having nothing in the store that sells for 99¢.

The store's motto is, fittingly, More trash for less cash!. 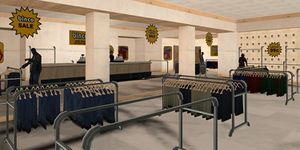 The range of clothing offered at Binco in GTA San Andreas are generally affordable, with prices that do not exceed the $100 mark. The store's selection of items are centered around generic clothing, as well as low-end clothing commonly donned by gang members.

The store also offers various novelty articles of clothing, such as joke eyepieces, masks, and a cowboy hat and cowboy boots. Binco also earns the distinction of being the only store chain to sell briefs (known as Boxers in-game, which can only be worn without pants) to the player.

Retrieved from ‘https://www.grandtheftwiki.com/index.php?title=Binco&oldid=396711’
Categories:
Cookies help us deliver our services. By using our services, you agree to our use of cookies.