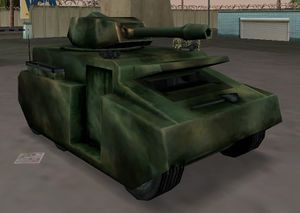 A Rhino in GTA Vice City.

Like its predecessor in Grand Theft Auto 2, the Rhino appears when the player attains a 6-star wanted level. In all games, the Rhino can be avoided without much difficulty because of its slow speed and bad handling, but it's extremely deadly if the player attempts engaging one, and the soldier driving it always carries strong weapons. Also, when successfully stolen, authorities or hostile characters can bust/pull out the player due to the Rhino's slow speed. When it hits a vehicle, the vehicle most of the time explodes straight away; if not, it starts to burn instead. In GTA Chinatown Wars, however, this does not happen. Although the Rhino has a cannon, it is never used by law enforcement, presumably because it would make surviving and escaping 6-star wanted levels impossible. However, this is changed in GTA Chinatown Wars as the army will fire the cannon which causes massive damage to, and usually kills, the player. The Rhino is practically invincible to gunfire and explosions, but can be damaged by crashes, the Police Maverick's machine gun, and most importantly, flames, making the Molotov Cocktail and Flamethrower the best weapons against a Rhino.

In GTA III, GTA Vice City, GTA Liberty City Stories, and GTA Vice City Stories, the Rhino appears to be closely based on the German Panzer IV tank, more specifically a cross between the Panzer IV Ausf. H with its distict side armor plates and the Panzer IV Ausf A with its short barrelled gun turret. This is also reinforced by its name "Rhino" as in the German language the indian rhinoceros is called the "panzernashorn" which literally translates to "armored rhino". In GTA Vice City, the "Spawn Rhino" cheat is "panzer" on the PC version.

In GTA San Andreas, the Rhino looks like an M1 Abrams and is much more realistic. It is colored beige (desert camouflage), has a normal tank entrance in front and a new drivetrain with smaller wheels, which look almost like tracks. It also has a new steering system, that finally allows the player to make very tight turns. The turret is operated with the mouse or right thumbstick (PlayStation 2), which allows the player to shoot directly at the target. The Rhino in GTA San Andreas is also heavy enough to literally push aircraft, making the Rhino an ideal vehicle to push the destroyed Andromada from "Stowaway".

The Rhino does not appear in Grand Theft Auto IV; this is assumed to be because of Rockstar's goal of making GTA IV more realistic than previous games, although remnants of a tank remains. The episodic pack The Ballad of Gay Tony, however, features the tank-like APC vehicle. However, GTA Chinatown Wars reintroduces the Rhino with an appearance similar to the original Rhino but depicts tank treads.

The Rhino returns in Grand Theft Auto V where it seems to be based on the German Leopard 2A4. Unlike in previous games, it now features moving tank treads which were likely omitted from previous incarnations due to hardware or game engine limits. It features an unusable M2HB .50 caliber machine gun on the commander's hatch.

From GTA III to GTA Vice City Stories, the Rhino is bullet-proof and explosion-proof and as such it is immune to all weapons minus incendiary weapons like the flamethrower and molotovs. In GTA San Andreas, the Police Maverick's machine gun can actually deal damage to the Rhino, which would have been impossible with any normal firearm. The Rhino is still a durable vehicle; however, after sustained collisions from other vehicles, tanks, and static obstacles, its engine will eventually catch on fire and explode. While driving the Rhino, one should be careful not to drive through the flames left behind by vehicles that have exploded, as these will set the Rhino on fire, which causes very fast damage and usually destroys it after the second time the Rhino catches fire from flames.

Due to the introduction of thread for GTA Chinatown War's Rhino, the tank gains another a minor advantage in that it can turn while in a stationary position. The durability of the game's Rhino, however, is turned down a notch, being more vulnerable to explosive damage than previous renditions; a pristine Rhino will begin burning as a whole after receiving seven direct hits from a Rocket Launcher or another Rhino's turret. However, it is still bulletproof.

In the tank, the player can perform Vigilante missions, which means catching and killing suspects. The Rhino isn't necessarily the best vehicle to do this mission because the player risks increasing their own wanted level at an accelerated rate due to the tank's penchant for collateral damage. On the other hand, if the player cannot complete the missions with the other, comparatively flimsy police vehicles, the Rhino might be better. If the player can intercept the enemy vehicles, rather than chasing them, the player may be able to strike the targets with the tank instead of firing on them. This method cuts down on the wanted level the player receives, which may help him avoid having to fight the military on some occasions. In GTA III, the player cannot get a wanted level for destroying vehicles in the Rhino by simply hitting them instead of using the cannon. Interestingly, in GTA Vice City, performing the same crime causes the police radio to call out the player as performing vehicular theft, much like when the player sets vehicles on fire with a flamethrower or molotov cocktail.

In GTA Vice City, there is a mission in which the player has to steal a tank under orders from Juan Cortez: Sir, Yes Sir!. Its doors are closed, so the player needs to wait until the driver hops out to buy some doughnuts, or kill the soldier on top of the tank. This tank has a self-destruct mechanism which the player must disable before it destroys the tank. The mission is failed if the tank is successfully stored in the Viceport Military Garage or if it is destroyed. In GTA Liberty City Stories, during the mission "Shogun Showdown", the Yakuza are storing weapons in a warehouse (they are actually located and along with that Toni Cipriani finds a Rhino which he later destroys by detonating it with a bomb or driving it into the water. In GTA Chinatown Wars, during the mission Deadly Xin, Xin Shan has the player use a NOOSE Rhino parked at Francis International Airport to create havoc, diverting the police from his own machinations.

Retrieved from ‘https://www.grandtheftwiki.com/index.php?title=Rhino&oldid=415501’
Categories:
Cookies help us deliver our services. By using our services, you agree to our use of cookies.