This page gives an overview of the concepts of secrets and Easter eggs, which are found throughout the Grand Theft Auto series. For lists of those that can be found in each game, use the following pages:

A secret is a part of the game that is usually not intended to be accessed by the player. For example, in Grand Theft Auto III, the game's introduction does not take place within the constraints of the game's landmass. Instead, it takes place on an isolated block of buildings (named the Ghost Town by fans), isolated by water and hidden from the player's view behind a solid landmass. The only way to access it is via modifications or by flying the Dodo across a long distance, an incredibly difficult feat for most players. Other examples include the FBI Truck and the Brickade, vehicles present in the game's files that can only be found and driven via modifications. 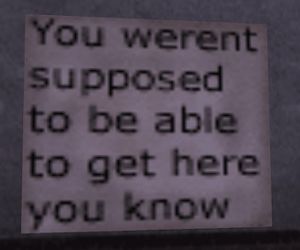 An Easter egg is something hidden within the game world that, unlike secrets, Rockstar Games actually intended players to find. They usually have no effect on gameplay, their only purpose being amusement. A good example would be a the large beating heart found within the Statue of Happiness in Grand Theft Auto IV, which is only accessible by landing on top of the statue's pedestal via helicopter and walking through a non-solid door (suitably marked with a plaque saying "No Hidden Content This Way").

Grand Theft Auto games contain a large number of references to and parodies of popular culture, usually in the advertising and media found ingame. For example, billboards in Grand Theft Auto: San Andreas advertise "True Grime Street Cleaners", a parody of the 'GTA Clone' "True Crime: Streets of LA". Furthermore, missions are often named as references to pop culture, for example, Don in 60 Seconds and Dragon Haul Z are plays on Gone in 60 Seconds and Dragon Ball Z respectively. Usually, these are categorized as Easter eggs.

Cheats are manual codes that can be entered by the player via controller/keyboard that directly affect the ingame world. They are used by players to make the game easier and to alter their gameplay for fun.

Modifications are alterations to the games not authourised by Rockstar Games. Examples include custom vehicles, new player skins and altered textures. Many tools exist to alter the gameplay experience, called Trainers, which can modify any number of things in real-time whilst you're playing a game, from spawning cars to enabling flight.

Occasionally, real brands from the real world are actually featured in the game. For example, in GTA: San Andreas, you can find supermarket carts (that don't appear in the game) in the internal files bearing the Safeway logo, or Union Pacific trains inside Zero RC.