Two shots of the ending sequences of both Scarface, and GTA VC. Note the similar setting.

The following is a list of secrets, easter eggs, and trivial references in Grand Theft Auto: Vice City.

The posters inside the Ocean View Hotel.

The billboard of Liberty City. 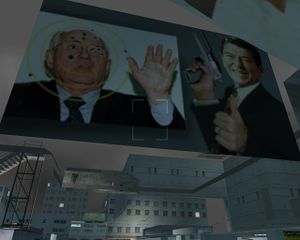 In the wall of the Downtown Ammu-Nation is a picture of American president Ronald Reagan shooting a picture of Soviet head of state Mikhail Gorbachev.

Retrieved from ‘https://www.grandtheftwiki.com/index.php?title=Secrets_in_GTA_Vice_City&oldid=360735’
Categories:
Cookies help us deliver our services. By using our services, you agree to our use of cookies.