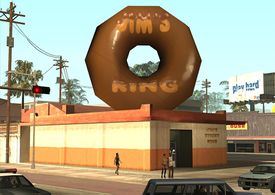 Jim's Sticky Ring is distinguishable largely by its large ornamental donut visible for city blocks, being seemingly inspired by the real-life Randy's Donuts in Los Angeles, although both outlets are only similar by the concept of featuring a giant rooftop donut; a similar architectural design is found on the Tuff Nut Donuts building in San Fierro.

The Jim's Sticky Ring building is normally inaccessible, although its interior is featuring during cutscenes in missions for C.R.A.S.H., namely "Burning Desire" and "Gray Imports", being the starting place for both of these missions. The interior can in fact be accessed via the Hidden Interiors Universe. However, when the player manages to access the shop, it says Rusty Brown's. Curiously, ketchup and mustard bottles can be found on the tables, which is unusual for a doughnut store.