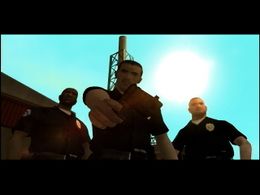 C.R.A.S.H. stands for Community Resources Against Street Hoodlums. Interestingly, not only did it exist as an anti-gang unit in fictional Los Santos Police Department, but it also existed in real-life Los Angeles Police Department, where the C.R.A.S.H. and the department was rocked by notorious Rampart scandal that led to suspensions, terminations, and desk job assignment of dozens LAPD officers involved in the scandal.

The Los Santos Police Department C.R.A.S.H. was thus loosely based on its real-life counterpart and the associated Rampart Division Scandal. Like Los Santos counterpart, Los Angeles counterpart was also involved in beatings, intimidations, planting evidences to frame other gang members, and other actions that essentially gives C.R.A.S.H. its leverages over other gang members forced to work with them in order to avoid retaliation, such as aforementioned beatings, cover-up of an actual crime used to frame them, et cetera, that may occur if they refuse to do what they are told by C.R.A.S.H. members.

The few known C.R.A.S.H. members are

Grove Street Families
Retrieved from ‘https://www.grandtheftwiki.com/index.php?title=C.R.A.S.H.&oldid=347577’
Categories:
Cookies help us deliver our services. By using our services, you agree to our use of cookies.