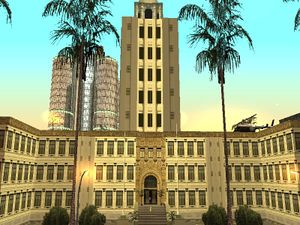 Los Santos Police Headquarters is the main law enforcement structure of the Los Santos Police Department, and sits on the east end of Pershing Square, caddy-corner to City Hall. This is where the player will re-spawn after being arrested anywhere within Los Santos city limits. This is also a recurring site during Los Santos missions. The building is based on the Beverly Hills City Hall.

After beginning to regain the trust of his fellow Grove Street Families members and his brother Sweet, Carl Johnson finds himself helping to rebuild the fractured gang in an attempt to revisit its former glory. During the process, Big Smoke asks Carl to help him pick up a friend recently released from prison. They drive off to meet OG Loc, who is waiting on the steps of Los Santos Police Headquarters. After picking him up, they head off to deal with some of Loc's "unfinished" business in East Los Santos.

Much later in the story, Carl returns to Los Santos Police Headquarters, this time to pick up Sweet after he is released from prison by Mike Toreno, as had been promised to Carl. Carl is excited to show Sweet all he has been doing while he has been incarcerated, bragging about burgeoning business ventures in San Fierro and Las Venturas. Sweet adamantly refuses, and again challenges Carl's allegiance to the Grove Street Families, demanding that he help him regain their home from the crack dealers and rival Ballas that have taken it over. They then head off to wrap up the last chapters of the story.

Retrieved from ‘https://www.grandtheftwiki.com/index.php?title=Los_Santos_Police_Headquarters&oldid=364470’
Categories:
Cookies help us deliver our services. By using our services, you agree to our use of cookies.