This article is about the character. For the mission in GTA San Andreas, see Big Smoke (mission)

Melvin "Big Smoke" Harris, better known simply as Smoke, is a character in the 3D Universe who appears as a secondary antagonist in Grand Theft Auto: San Andreas. A high ranking member of the Grove Street Families who later joined forces with the Ballas, Los Santos Vagos and Russian Mafia, becoming the biggest criminal in the underworld of Los Santos, he is voiced by Clifton Powell, who has also appeared in Menace II Society.

Smoke was born in Los Santos, and grew up on the Grove Street cul-de-sac in Ganton next door to gang-leading Johnson brothers Sean "Sweet" Johnson, Brian Johnson and Carl "CJ" Johnson, who he was friends with, as well as friends Lance "Ryder" Wilson and Jeffrey "OG Loc" Cross. He and his childhood friends were founding members of Grove Street Families. Brian somehow died in 1987 with Carl's negligence to blame, and Carl left for Liberty City.

Eventually, the Grove Street Families went downhill over the next five years. Smoke tried to convince Sweet to let the gang sell crack cocaine, though Sweet was vehemently opposed to it. Smoke began to secretly sell it under the guidance of corrupt C.R.A.S.H. officer Frank Tenpenny, which saw him secretly work with the Ballas, the gang's sworn rivals. Smoke made enough money to buy a new house and a vintage black Perennial, which he told Carl he paid for with an inheritance from his dead aunt. Smoke's old house on Grove Street, next door to the Johnson residence, was still used as a regular hangout. Before long, Smoke is supplied large amounts of cocaine by the Loco Syndicate from San Fierro, although he doesn't know of a top secret government agent's involvement in the transactions.

Smoke later let Ryder in on his secret dealings in 1992. Over the week, Tenpenny organized a hit on Sweet - the assassins, a few Ballas behind the wheel of a green Sabre, sprayed the Johnson residence with machine gun fire but accidentally killed Sweet's mother Beverly Johnson instead. Carl is forced to return to Los Santos for the funeral, which is when the actual storyline begins.

Smoke is the first to welcome Carl home, and brings him to the funeral to meet Sweet, Ryder and Carl's sister Kendl Johnson. However, while Smoke welcomes Carl back with open arms, as does Kendl, Sweet and Ryder remain bitter about Brian's death. The funeral is attacked by Ballas in a purple Voodoo, which the four of them escape on bicycles. Smoke's Perennial is destroyed in the process, which he promptly replaces with a teal Glendale. A week or two later, when the four of them are at a fast-food drive-thru, they are targeted by the hitmen from the same Ballas set, in a congruent Voodoo. Sweet, Carl and Ryder kill them with no help from Smoke, who instead continued eating his meal. The rest of the gang is angry at him, though he passes it off as a simple personal eccentricity and it's more or less forgotten.

Carl helps Smoke outside of official gang business, which is when he first begins to suspect Smoke is concealing his true allegiance. Amongst the many instances when he helps him, two incidents in particular, namely a chase for a train full of Los Santos Vagos enroute to meet the San Fierro Rifa, and a large shootout with the Russian Mafia, peak Carl's curiosity while Smoke is reluctant to answer his questions.

Eventually, the Grove Street Families regain the influence they had in the mid-1980s. Carl proves to be a great asset to the gang, which earns him Sweet's respect back. At their peak, they plan to balance terms with their former ally sets, the Seville Boulevard and Temple Drive Families, though their meeting at the Jefferson Motel is stormed by S.W.A.T. teams. Smoke and Ryder urge Carl to flee the scene with them, though Carl insists on saving Sweet. When Carl reaches Sweet, he first expresses distrust in Smoke and Ryder, claiming them to have ditched the brothers. However, Smoke and Ryder actually return to Sweet and Carl's aid, and all four of them escape unharmed. 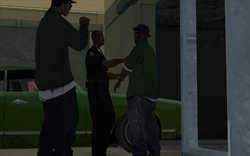 Big Smoke, Ryder, Frank Tenpenny and Eddie Pulaski with the green Sabre used to kill Beverly Johnson, as witnessed by Carl Johnson and Cesar Vialpando, during The Green Sabre.

Very soon after, the newly-united Families are on their way to attack the Ballas under the Mulholland Intersection. However, before Carl can join Sweet, Mexican-American Varrios Los Aztecas gang leader Cesar Vialpando, Kendl's boyfriend, summons Carl to Verdant Bluffs where he witnesses Smoke, Ryder, Tenpenny, hot-headed C.R.A.S.H. officer Edward "Eddie" Pulaski and the Ballas conferring around the infamous Green Sabre. Carl rushes to save his brother, but ultimately fails - Sweet is shot and mended in a prison hospital, while Carl is abandoned in Whetstone by Tenpenny.

Feeling free to his own will, and no longer weighed down by the Johnson brothers, Smoke becomes the most powerful drug lord in Los Santos. Eventually, the Ballas, Vagos and Families disregard their gang ties and unilaterally work for him. Former high-raking Grove Street Families members Ryder and Mark "B-Dup" Wayne both become wealthy in his employ, though Smoke does not trust Dup enough to make him a "lieutenant", so to speak, while Ryder serves as Smoke's right-hand man. Twice a week, Smoke takes in a backpack full of cocaine from dealers in San Fierro, and sends back money in a Patriot, in return. Loc has since become a successful rapper, and Smoke launders drug money by becoming his manager. Additionally, he takes on the public image of a benefactor to orphanages and anti-drug campaigns, further concealing his drug operation. Aside from his public charity appearances, he is extremely paranoid and rarely ventures out of a fortified apartment tower he owns in East Los Santos. He owns a white Feltzer, with the custom license plate "IMY AK", but rarely gets to enjoy it because he is a shut-in.

Carl gets back on his feet in San Fierro, destroys Smoke's affiliations to a drug cartel called the Loco Syndicate, and kills Ryder. Word of Ryder's death runs wild in Los Santos, according to Cesar, though Smoke is undeterred and finds a new supplier of raw cocaine, starting his own drug manufacturing plant in the fortified apartment. Carl later finds his way back to Los Santos, and manages to have Sweet freed from a supposedly unsurmountable life sentence, ironically by undercover government agent Michael "Mike" Toreno who organized the Loco Syndicate in the first place. Sweet and Carl build the Grove Street Families from the ground up a third time, while Loc and Dup are shaken down but left alive. As Tenpenny's acquittal for corruption hits national news, riots break out all over Los Santos. Carl and Sweet use this opportunity to gain even more turf, and Sweet eventually find a high-ranking Vagos member who spills Smoke's location to them. 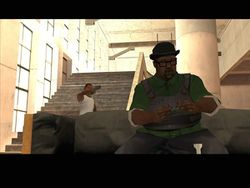 Carl Johnson confronting Big Smoke in his drug manufacturing factory, shortly before a shoot-out and Smoke's death, during End of the Line.

Carl ventures into Smoke's apartment tower alone, in order to prove a point to himself and Sweet, and makes his way to Smoke's penthouse. Smoke is at first slow to respond to Carl. They then have a short argument, in which Smoke is somewhat jealous and resentful of Carl but relishes his own success. Carl attempts to rebate by stating Smoke had a family, but is interrupted by him as he says he can't care more. A clearly disappointed Carl asks Smoke what had gone wrong, to which Smoke replies by asking how it matters to Carl. He grabs a shotgun and aims it at Carl. 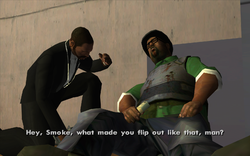 After a shootout in his apartment, Carl manages to get five bullets through Smoke's body armor, flooring him besides his open safe and his spilled money. Carl tries one last time to reason with Smoke as he dies. Smoke grabs onto some of his money, and admits that he was attracted to the power and money and that he only saw an opportunity. Smoke's last words are filled with vanity, however, and he proclaims he will be remembered after his death. Carl somberly whispers to himself, lamenting Smoke's death, before he is confronted by Tenpenny. The apartment tower is burned down by Tenpenny, which causes the media to rule Smoke's death as an accident. After an epic car chase throughout Los Santos, using Smoke's white Feltzer, Carl and Sweet kill Tenpenny in a supposed accident as well.

Retrieved from ‘https://www.grandtheftwiki.com/index.php?title=Big_Smoke&oldid=418771’
Categories:
Cookies help us deliver our services. By using our services, you agree to our use of cookies.