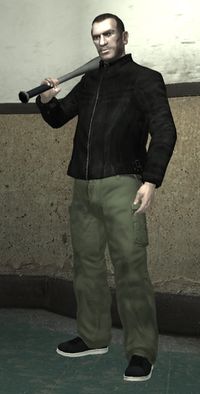 In Grand Theft Auto III, Claude wears this outfit and it is his default outfit in that game after the first mission, where he wears an orange prison jumpsuit as he is escaping the Liberty State Penitentiary. In the PC version of Grand Theft Auto III, there is another outfit that Claude can don, which consists of a brown jacket, blue jeans and white sneakers, although the player has to change it in the game settings. Unlike other GTA III Era Games, other than the two outfits mentioned, the latter of which can only be changed in the game settings section, the player(s) CANNOT change his outfit without resorting to cheats, modifications and trainers. Claude's Outfit consists of a black leather jacket, green trousers and dark blue shoes.

Claude's Oufit makes an appearance in Grand Theft Auto IV. Niko Bellic can wear the outfit if he chooses. The outfit spawns in the wardrobe of Playboy X's Penthouse. The outfit can only be obtained from that location and it cannot be bought. It can only be obtained if the player chooses to kill Playboy X in the mission The Holland Play, as the player can only access Playboy's wardrobe after killing him. Unlike GTA III Era games, changing into the Outfit DOES NOT remove a wanted level in Grand Theft Auto IV.

Claude's Outfit in its GTA IV rendition consists of a black jacket with green cargo pants and black-and-white crepe-soled sneakers, mimicking the outfit worn by Claude in Grand Theft Auto III. The individual items of clothing are merely recolors or existing outfits from clothing stores: The jacket is a retexture of the Albanian biker jacket, while the shoes are identical in form to the tennis shoes from Modo. The cargo pants appear to be identical to those available from the Russian Shop. Unlike the Hospital Scrubs and the Albanian Biker Jacket, Claude's Outfit has no influence on gameplay outside of comments from girlfriends and friends.

Retrieved from ‘https://www.grandtheftwiki.com/index.php?title=Claude%27s_Outfit&oldid=418788’
Categories:
Cookies help us deliver our services. By using our services, you agree to our use of cookies.