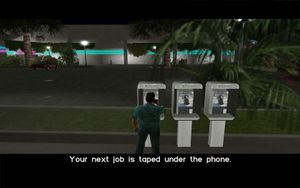 Public telephones, also known as payphones and pay phones, is a recurring communication device/machine in the Grand Theft Auto series.

Having appeared in every single Grand Theft Auto game to date as street props, public phones are, in both Grand Theft Auto 1 and Grand Theft Auto 2, a crucial mode of communication between the player and various criminals, as verbal and face-to-face mission bosses are not possible. Ringing in various portions of cities, players are issued orders by said party to perform a string of missions, simply by walking in front of the marked telephone booths.

The system is employed more extensively in GTA 2, where individual missions are trigger each time the player walks up to a ringing public phone. Access to specific phones in GTA 2 is dependent on the player's level of Respect towards a specific gang, determining whether the player has access to any phone affiliated with a gang at all or have access to specific color-coded phones tied within a gang; on top of gang colors, each set of these phones are marked as arrows with green, yellow and red accents, which are only accessible with increasing level of respect towards a gang.

Aside its use to communicate with players, public telephones have by large been nothing more than decorative street furniture until GTA IV, where pedestrian may enter animation sequences using public phones.