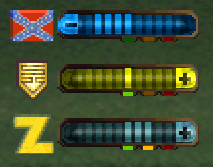 The respect meter in GTA 2, which does not only indicate which gang is hostile or friendly to the player, but also any payphones the player has access to. As indicated in the image, the player can receive jobs from the Scientist's green phones and the Zaibatsu's green and yellow phones, but is an enemy of the Rednecks.

In GTA 2, respect is a fundamental aspect of the gang system, determining which gangs the player may work with and how gang-members may react to the player. A phrase in the game, "Respect is Everything", expresses the importance of respect in gameplay.

The game's HUD displays a respect meter for each of the current district's three gangs. These all begin at a neutral level. The gang's "respect" for the player will increase or decrease with the player's actions:

A neutral-to-positive respect level from a gang will grant the player the ability to receive missions from the mentioned gang via payphones. The respect meter further provides indications on which payphones the player can access via a series of three color-coded lights (each assigned to phones with the same colors, including, in ascending order, green, yellow and red) that light up in accordance to the level of respect the player has from the gang. The higher the respect level, the more phones the player can access.

Gangs with a negative respect level will naturally be hostile toward the player, with its members firing at the player when the player enters their territories. In addition, gangs that view the player unfavorably do not trust the player, and so will not offer up their missions strings to the player.

A pickup is available that will boost gang respect towards the player.

In GTA San Andreas, respect, or "street cred" is an element indicating how inclined your gang is to help you. The more respect you have, the more gang members you can recruit to tend to your personal interests. Raising your respect is straight-forward; doing missions and murdering rival gang members and police officers are the most common ways. Respect also affects Sex Appeal.

Up to seven gang members can be recruited. This will not happen until you have roughly 80% of your respect meter full.

Gangs in the Grand Theft Auto series
Retrieved from ‘https://www.grandtheftwiki.com/index.php?title=Respect&oldid=79824’
Categories:
Cookies help us deliver our services. By using our services, you agree to our use of cookies.