Short-range, high-impact automatic weapon. Popular with Cuban drug barons and other lawbreakers. No social benifit with this one - unlike most machine guns. 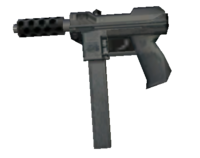 The TEC 9 is a light submachine gun appearing in Grand Theft Auto: Vice City, Grand Theft Auto: San Andreas, and Grand Theft Auto: Liberty City Stories. The TEC 9 fires in a very slow rate of fire, holding 50 shots in the magazine. However, it deals the same amount of damage as the Micro-SMG and Micro Uzi (20 points of damage). It is commonly used by gangs. When the Hitman skill level is reached in GTA San Andreas, the TEC 9 can be dual-wielded. The dual-wielded TEC 9s are extremely lethal, with a much faster rate of fire and higher accuracy and range.

The TEC 9 is a cheap open-bolt handgun manufactured in the United States between 1980 to 1994 by Intratec. It is based on the Carl-Gustav M/45 submachine gun, more commonly known as the "Swedish K". Originally it was designed as a low-cost alternative to the M/45, but never found a military market. Not wanting to abandon the idea, Intratec put semi-automatic versions onto the civilian market. It gained infamy after criminals found the open-bolt design to be easily convertible to be fully automatic.

Retrieved from ‘https://www.grandtheftwiki.com/index.php?title=TEC_9&oldid=411168’
Categories:
Cookies help us deliver our services. By using our services, you agree to our use of cookies.