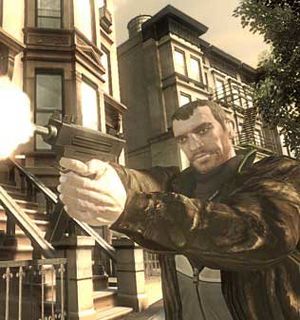 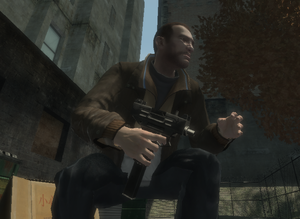 The GTA III version of the weapon features an orange tip on the muzzle, a feature usually reserved for toy weapons. This might imply that Claude may have disguised the weapon, that Ammu-Nation paint the muzzles of its Micro Uzis before selling them, or that the weapon has been converted out of a toy. Since real life criminals often disguise their weapons by painting the muzzle orange, the former explanation might be the legitimate one.

In GTA: San Andreas the model has two magazines taped together for easier reloads and resembles the look of a Micro Uzi but called Micro SMG in game. The Micro Uzi shares the same skill slot as the Tec-9. When Hitman skill level is reached, it can be dual wielded, doubling the player's round count to 100. In GTA III, it is a weapon of choice for the Yakuza, Southside Hoods and Colombian Cartel. This sub-machine gun is more commonly used by the Ballas, Varrios Los Aztecas and Da Nang Boys gang members in GTA San Andreas. In GTA San Andreas, it has a rapid rate of fire.

In Grand Theft Auto IV, the Micro Uzi is called the Micro SMG just like in San Andreas. It can be identified as the pistol version because the side-folding wire stock is deleted, and there is no provision on the rear of the receiver to mount one. One can only assume that the pistol was illegally modified for full-automatic operation. It has a 50 round magazine capacity, which is incorrect because its magazine has the dimensions of a 32 round magazine. The weapon has a very limited range, about equal to the pistol, and will kill multiplayer enemies with about 5 headshots or 10-15 bodyshots. It is probably the weakest weapon in the game, and is only used because of its incredible rate of fire, which makes it the best weapon available for drive-bys.

The Micro-SMG can be purchased from the back-alley gun shops after the mission Do You Have Protection? for $1,200 and each additional magazine costs $100. It can be purchased from Little Jacob for $840 and each additional magazine will cost $20. The Uzi has minimal range and poor stopping power, but it has an extremely fast rate of fire and a 50 round magazine, making it the best weapon in the game for drive-bys or car chases because you can just spray without having to reload.

Wikipedia has an article on:
Uzi
Retrieved from ‘https://www.grandtheftwiki.com/index.php?title=Micro_Uzi&oldid=404750’
Categories:
Cookies help us deliver our services. By using our services, you agree to our use of cookies.