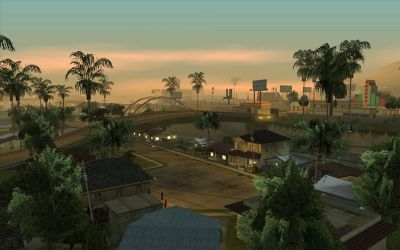 Grove Street is a cul-de-sac in Ganton, Los Santos, which is the main base of operations for the Grove Street Families. It is based on Rosecrans Avenue in Compton.

Grove Street is the home of Sweet and Carl Johnson, the leaders of the Grove Street Families. They, along with their two siblings Kendl and Brian, were born and raised in the Johnson House. Beverly, their mother, continued to raise her three remaining children (Brian had died in 1987) in Grove Street, until her death during a drive-by shooting on her house. Her son, Carl, returns after leaving for Liberty City, and begins living in her house.

Grove Street, as the main base for the Grove Street Families, comes under attack from Ballas gang members. One instance is the drive-by shooting that led to Beverly Johnson's death, and when OG Loc hosted a party at his house; three waves of Ballas members attempt to take Grove Street, although they ultimately fail. However, following the arrest of Sweet and the forced re-location of Carl (by C.R.A.S.H.), Grove Street and all other Grove Street Family territories fall into the hands of the Ballas. This is helped by Ryder and Big Smoke, who had aligned themselves with the Ballas.

Retrieved from ‘https://www.grandtheftwiki.com/index.php?title=Grove_Street&oldid=398458’
Categories:
Cookies help us deliver our services. By using our services, you agree to our use of cookies.