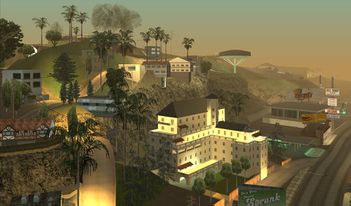 Mulholland, Los Santos, as viewed to the northeast in GTA San Andreas. 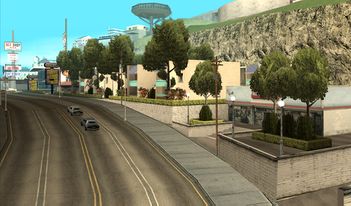 The southern low-lying portion of Mulholland borders Temple and consists of commercial businesses and low-grade accomodations. 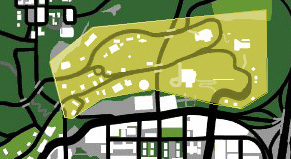 Mulholland is a rich neighbourhood in Los Santos, San Andreas, named after Steven Mulholland, a Los Santos artist for the game. Mulholland is located in the northwestern area of the city. Richman is located west of the district, Mulholland Intersection and part of Red County from the east, Red County and Dillimore from the north and Vinewood from the south. The district is situated high on the hills, most roads are uphills, downhills and hairpins, large villas and mansions are present in the district. However, it is unknown whether the residents are wealthy and rich or not since the cars moving in the district are poor cars.

Richman is actually considered more up-scale than Mulholland. This is evident by the types of houses that contrast with eachother: Richman having more traditional mansions, and Mulholland having more stilt houses that aren't very appealing. Also, the roads in Mulholland are more narrow and ridden with cracks, in contrast to Richman's more refined, wider roads.

Shortly after protagonist Carl "CJ" Johnson returns to Los Santos and, among other tasks at hand, starts helping his friend and part-time Grove Street Families affiliate Jeffrey "OG Loc" Cross build up his aspiring rap career, he is asked by Loc to steal celebrity gangsta rapper Madd Dogg's rhyme book, from his crib mansion in the hills of Mulholland. Carl does so, and delivers the rhyme book to Loc.

Later, Carl rescues Madd Dogg from suicide, presumbaly out of guilt for having ruined his career in the first place, after a very long exile in the wake of a loss of territory and power to rival gangs eventually lands him up in Las Venturas. Sending him to rehabilitation after he proclaims him as his new manager, Carl resumes his criminal activities in the mob-infested city, when Madd Dogg suddenly returns, claiming he wants to go back home, to the crib mansion, which he had previously gambled away after his downfall to Big Poppa, a drug leader in the Los Santos Vagos gang circles. Carl seeks the help of the Chinese-American San Fierro Triads, headed by blind leader Wu Zi "Woozie" Mu, in reclaiming the crib mansion from the Vagos and Big Poppa, and succeeds in getting back the rapper's crib mansion by force.

Later, as many as four major central storyline missions then take place from the crib mansion. For the first mission, Carl is pressured into performing a highly dangerous covert operation involving the theft of a military jet off an amphibious assault ship to use it to destroy a flotilla of spy boats, in exchange for his incarcerated brother Sean "Sweet" Johnson's freedom and release from prison, by undercover government agent Michael "Mike" Toreno. Following the success of the operation, Toreno finally has Sweet paroled from a supposedly insurmountable life sentence, and Carl helps Sweet reclaim home terriory from the gang's sworn rivals, the Ballas. Next, Madd Dogg seeks Carl's help in tracking down Loc and recouping his rhyme book and royalties, and soon, Carl and his new affiliates, less the rapper's record producer Kent Paul and accountant Ken "Rosie" Rosenberg, find themselves next at the crib mansion during a tense coverage of the high profile criminal case against corrupt C.R.A.S.H. officer Frank Tenpenny. However, all charges against him are dropped due to lack of evidence, triggering a city-wide riot. Carl then returns to his home in Grove Street, Ganton and resumes the rest of his activities from there, which make for the game's final showdown missions.

Los Santos (3D Universe)
Retrieved from ‘https://www.grandtheftwiki.com/index.php?title=Mulholland&oldid=418118’
Category:
Cookies help us deliver our services. By using our services, you agree to our use of cookies.