From Grand Theft Wiki
(Redirected from The Liberty Tree)
Jump to: navigation, search

The Liberty Tree is a fictional newspaper that serves Liberty City in various Grand Theft Auto games. The Liberty Tree has been "Promoting Family values for over 50 years", and has existed for at least 50 years of service, with their slogan being "Yesterday's News Today". Each issue costs $1.00 in Liberty City, and can be read online as well. It is a play on The New York Times.

The map that accompanied the game had a map provided by the newspaper. Liberty Tree was featured prominently in Grand Theft Auto: Liberty City Stories through Ned Burner, who pretends to be a preacher. He gives missions to protagonist Toni Cipriani from a confessional box in the cathedral in Bedford Point, saying that they will help save him. The first mission is to retrieve a briefcase from an FBI informant before he hands it to the FBI, and then delivering it to the Liberty Tree offices. Cipriani then steals another briefcase containing diamonds, and then creates chaos on Staunton Island whilst driving a Firetruck. The final mission for Burner was killing three celebrities (Faith W., DB-P and Black Lightman) on their way to an interview with Liberty City Free Radio. Burner would report on each story: the first about an athlete on steroids, the stealing of diamonds, chaos on Staunton Island and the death of three celebrities. Burner would eventually be killed by Cipriani on orders from Donald Love as Burner witnessed the killing of Avery Carrington.

Unrelated to the plot, the User Guide for Liberty City Stories is in the form of a copy of the Liberty Tree. 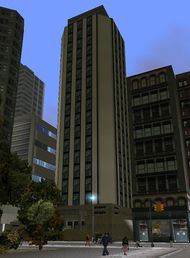 Accordong to the GTA IV documentary, A History of Liberty City, the first Liberty Tree newspaper came out in 1835, however citizens complained about this as they wanted less political news and more dirtier news, like murder and rape.

In Grand Theft Auto IV, Liberty Tree newspapers are sold in newspaper vending machines on busy roads and in food kiosks, although they can not be purchased by the player. However, driving very hard and fast into one of the vending machines will break it and send newspapers flying around in the air.