Citing increased chatter by known terrorists, officials raised the threat level to Magenta 5 and have closed many bridges in the metropolitan area causing havoc for commuters and forcing many to lose their jobs and contemplate selling their bodies to make up for lost income. Officials speaking on the condition of anonymity said that, while they don't speak Arabic, the chit chat they heard was something like "slalom" which rhymes with "dirty bomb."

Police Lieutenant Chuck Montresse said, "This is what the terrorists want - they want us to be afraid. So, just to be cautious, we're going to be shit-scared, shut down the bridges and show them that freedom will always win."

Ushering in a whole new wave of pro-America feeling, 30,000 new N.O.O.S.E agents were sworn in to help defend the homeland. In what are promised to be intense interrogation techniques by federal agents, the extension of the Jingoism Act removes the checks and balances that were hindering protecting America. Another part of the provision includes throwing out all history books that might indicate abandoning a free republic to be a bad idea.

An explosion has occurred at a garage on Guantanamo and Windmill in South Bohan. Investigators on the scene have found traces of ammonium nitrate and nitromethane as well as the remains of a large truck. These are common ingredients in explosive devices. It doesn't take a genius to connect the dots and blame terrorists here in Liberty City for the horrific destruction wrought at the garage. Luckily, no employees were present at the time of detonation. The garage is located on a busy street where people walk to go to work and do their shopping. We got lucky this time.

Guts Strewn All Over Fishmarket 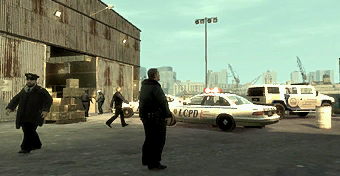 The bodies of several men have been found at the docks in Fishmarket South. Authorities believe they may have been members of a "triad" street gang smuggling contraband into Liberty City. Last year's prosecution of several members of the Dockworker's Union led to allegations of widespread corruption amongst the stevedores. A spokesperson for the National Office of Security Enforcement stated that the docks in Liberty City are the gateway through which the majority of drugs, sex slaves and counterfeit goods come into the United States, "It is only a matter of time before a terrorist smuggles a nuclear weapon through our docks. If the unions do not clean their act up and agree to serious salary cuts and concessions, this is a very real danger."

Multi-millionaire Russian businessman, Eduard Borodin, died in a tragic helicopter accident just south of Algonquin earlier. After Borodin's attempts to purchase a section of Middle Park had been blocked by the Mayor, he was flying around Liberty City in order to scout out a location to build a megamansion. Disaster struck and the helicopter plunged into the water. Many witnesses on the shoreline reported seeing a mysterious second helicopter apparently firing at Mr. Borodin's. Tourist Molly Jenkins of San Fierro stated that she saw, "these flashes of light like missiles come out of the other helicopter. Then the one in front, it just burst into flames." 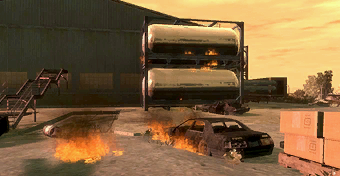 N.O.O.S.E representatives are blaming terrorists for a massive explosion at a fueling depot in Northwood earlier, however not everyone is convinced. Having been criticized for their failure to tackle the rise in organized crime, some say this may be an attempt to divert attention. Those killed in the blast were known associates of the Ancelotti crime family and the warehouse itself was owned by Anthony "Tony Black" Spoleto, 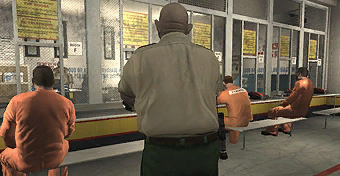 There has been yet another mass shooting in Alderney. Again it involved members of the Pavano crime family and again the National Office of Security Enforcement is calling it an act of terror. Whether this is an act against AutoEroticar, the retailer where the shooting took place, or the mobsters who were slaughtered, N.O.O.S.E would not say. However, they have stated that several suspects have been airlifted from Liberty City to an offshore questioning centre. These massacres have changed the spirit of Alderney forever. No more will that patch of land on the other side of the West River be associated with good working-class values, polluted swamps, spray-on tans, big hair, violent racist masculinity and other American-as-apple-pie attitudes of the suburbs. Maybe it's time to think about blocking the Booth Tunnel once and for all.

Retrieved from ‘https://www.grandtheftwiki.com/index.php?title=TJ_Barry&oldid=399952’
Categories:
Cookies help us deliver our services. By using our services, you agree to our use of cookies.