The World of Coq logo.

Dick Goblin's World of Coq is a restaurant chain in Grand Theft Auto: San Andreas, prominently featured as a place for players to take girlfriends on dining dates. 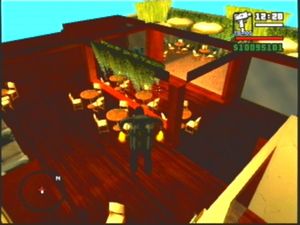 World of Coq is an upper-class eatery primarily found in richer segments of San Andreas' three major cities; the chain's lavish atmosphere is perfect for girlfriends with more "upscale" tastes (Millie Perkins and Helena Wankstein are the only two girlfriends who like going to the restaurants). The restaurants, whose exteriors are unlabeled, are inaccessible to the player unless on a date, and interior views are only granted during the date's cutscene. Unlike the fast food chains throughout San Andreas, the player is not granted the option of choosing from a menu while dining at World of Coq.

While inaccessible to the player in normal gameplay, its interior can be reached via the Hidden Interiors Universe. The interior consists of a medium sized room with chairs, pottery, an outdoor dining area, and ambient music playing in the background.

There is a total of three World of Coq outlets throughout San Andreas, each located in the state's three cities:

Retrieved from ‘https://www.grandtheftwiki.com/index.php?title=World_of_Coq&oldid=415889’
Categories:
Cookies help us deliver our services. By using our services, you agree to our use of cookies.