The Rumpo is an average-sized van capable of carrying four passengers (two in the front, two in the back). It is common and can be found in most areas in the cities in which it appears, but like all vans, it tends to be most common in industrial areas. It also has 2 small windows at the very rear of the vehicle. In GTA III and GTA Liberty City Stories, the van appears to be based on a first generation Dodge Ram Van. A modified version of this van is used by the Southside Hoods gang.

In GTA V, the Rumpo is based primarily on the 2008-2014 Ford E-Series. A camper variant called the Paradise appears as part of the Beach Bum Update.

When originally introduced in GTA III, the Rumpo is fairly fast, but with average handling and a tendency to two-wheel and tip over under rough cornering.

The redesigned Rumpo in GTA Vice City, GTA San Andreas and GTA Vice City Stories handles much like the smaller Pony, but is slightly slower and heavier (weighting at 1700 kg, 100 kg less than the GTA III and GTA Liberty City Stories renditions). Also, because of it's height and stiff suspension it has a nasty tendency to jolt around and even tip on bumpy roads.

Despite its weight, the Rumpo is not particularly good for ramming, so all of these factors combine to make the Rumpo a vehicle to avoid. All Rumpos in the GTA III era are also front-wheel drive (except in GTA Advance, which does not specify) while the GTA V rendition is rear wheel drive. 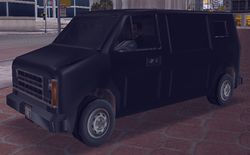 The black Rumpo obtainable during "Under Surveillance".

In GTA III, a unique all-black Rumpo (with black trims) appears during the "Under Surveillance" as a vehicle occupied by two targets which the player must kill. To acquire the van, the player must open fire at the vehicle at close range using a gun, forcing the occupants to exit the vehicle; if shot from a distance, the driver may use the van as a weapon to run over the player, making the act of retrieving the van more difficult. Once the targets are killed, the player may take control of the vehicle and save it in a garage after the mission is complete.

There is some confusion regarding the names and designs of the Rumpo, the Burrito and the Pony between GTA III and GTA Vice City Stories.

In GTA III, the Rumpo chiefly resembles a Dodge Ram Van; in subsequent games, however, the Ram Van-derived vehicle is named Burrito. In GTA III, the Pony is a large van with an elevated roof; in GTA Vice City and GTA San Andreas, the Rumpo inherited this design, and the Pony was given a new one.

Retrieved from ‘https://www.grandtheftwiki.com/index.php?title=Rumpo&oldid=412727’
Categories:
Cookies help us deliver our services. By using our services, you agree to our use of cookies.