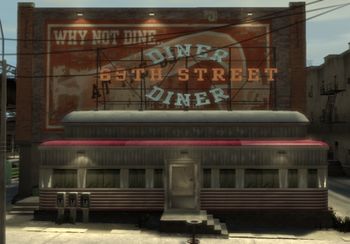 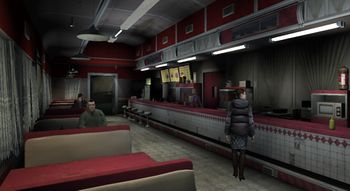 The interior of The 69th Street Diner

The 69th Street Diner is a restaurant located at the intersection of Bart St. and Mohawk Ave in Hove Beach, Broker, Liberty City. Niko Bellic can buy food there to replenish his health. Niko can take his friends or girlfriends out to the diner for a meal. The diner is featured in the website www.peepthatshit.com.

The 69th Street Diner on the outside, has a somewhat wore down "50s style" appearance. Inside, there are several booths and stools which maintain the style as well. There are several occupants in the diner, some of them are sometimes armed; the ones that are armed only open fire when Niko or others open fire first.

There are two entrances to the diner, a side entrance and a front entrance, which faces Mohawk Ave.

Outside the diner there are several well armed Mafia that will fire on Niko if he opens fire.

In the mission Out of the Closet, Niko plays along with a romantic dinner and kills Tom Rivas at the diner for Brucie because Tom had borrowed money from Brucie and was refusing to pay it back.

Retrieved from ‘https://www.grandtheftwiki.com/index.php?title=The_69th_Street_Diner&oldid=402824’
Categories:
Cookies help us deliver our services. By using our services, you agree to our use of cookies.