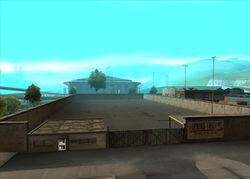 The Driving School is an educational establishment in Grand Theft Auto: San Andreas where the player learns advanced maneuvers and tactics of handling a vehicle. It is located in Doherty, San Fierro, two blocks down from the Doherty Garage and across the Doherty Safehouse. It is marked by a red "S". After completing the mission Deconstruction, Jethro will call and tell about the Driving School.

Spending more and more time there will increase the player's ability to drive and once the meter is full all cars handling will become better than before. While completing the school in general is quite hard, getting all gold medals is extremely hard for the average player, and most golds are result of a fluke. Challenging points are time limits, and a damage meter.

Accessing the TV will automatically enter Back to School. Passing the school is required to unlock the mission Zeroing In and the rest of the Wang Cars asset missions.

Also, inside the Driving School is where the player can first find Michelle Cannes, one of the six possible girlfriends Carl Johnson can date.

The scoring is based on the position and heading. This is the formula of the scoring:

The reward for all Bronze is a Super GT, for all Silver a Bullet, and for all Gold a Hotknife with a custom license plate reading "GOLD". These will be parked outside of the school. Provided the semi-climactic mission Yay Ka-Boom-Boom has been completed, a second post-mission phone call will enable access to the purchase of the Wang Cars showroom, which will unlock the mission Zeroing In.

Jethro: Yo! It's Jethro man! Listen, me an' Cesar have used our contacts to, like, get a wish list of cars, but we'll need to turn them around real quick dude. Now there's a showroom around the block that's come up for sale, and I thought it would be a good idea to make things look as legitimate as possible.

Retrieved from ‘https://www.grandtheftwiki.com/index.php?title=Driving_School&oldid=418563’
Category:
Cookies help us deliver our services. By using our services, you agree to our use of cookies.