In GTA San Andreas, the Super GT is based on a 1993 Mitsubishi 3000GT with the back of a 1993-2002 Toyota Supra. The Super GT can be modified at TransFender garages. There are also two versions of this car; a hardtop and a targa top.

As San Andreas is set in 1992, the base models are anachronistic by a year, but this could explain its high price and rarity. 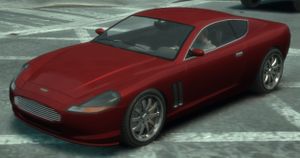 In GTA IV, the Super GT (branded as a Dewbauchee car, although police radio chatter erroneously refers to it as a Pfister) is an amalgamation of various sports cars: the front and side profiles appear to share design cues from both a modern Aston Martin DB9, or an Aston Martin DBS and a Maserati GranTurismo, while the rear fascia resembles that of a Ferrari 612 Scaglietti, Mitsuoka Orochi, and a Ferrari 550 Maranello; the side vents appear to be from a 2005 Land Rover Range Rover Supercharged. The Super GT has a turbocharged V8 engine, contrary to the V12 engines used by the Aston Martin DB9 and DBS. The Super GT lacks an external radio antenna.

The Super GT is also available with differing hood designs, either featuring a relatively smooth hood, or one with a low U-shaped ridge. The interior features black leather and carpeting with bucket sports seats. The center console is finished in aluminum trim and features an analog timepiece. The Super GT also features a gated 5-speed shifter.

The F620 in The Ballad of Gay Tony shares several similarities to the Super GT.

The Super GT has a top notch speed and acceleration, but its downside is that even when driving in low speeds, turning can cause wild fishtailing, even more so when driving in higher speeds. The Super GT's collision durability isn't that good either. Therefore, the player should use caution while driving the car and turn slow and gently. Stepping off the gas will also help. If the back starts sliding out of control, let off the gas and slightly turn to the opposite direction.

In GTA IV, the Super GT is among one of the fastest cars in the game with a top speed is 211 mph (340 km/h) - even faster than most Aston Martins in real life, and the acceleration and speed of the Super GT are superior to many other cars in the game. The distinct sound of a turbocharger can be heard at higher RPMs, which separates it from the other supercars. The Super GT is an excellent choice for its speed and for its brakes, which are powerful and don't lock up very easily. Also, because of its high horsepower to torque ratio, the car can easily be slid into a drift by a single tap of the E-Brake (at moderate enough speeds); making the Super GT a great choice for drifting.

The car's rank in performance is pushed further back with the introduction of faster sport cars in subsequent Episodes of Liberty City DLC.

The Super GT in GTA San Andreas can be modified at a TransFender, but is only offered a bare minimum of modification options:

The Super GT is central to the final test for the Driving School, in which the player must use the car to drive to the other end of San Fierro and back. Completing the Driving School with Bronze or better will award the player with a maroon Super GT that will constantly spawn in front of the school.

During a car chase in one of Bernie Crane's missions, the Russian criminals drive a Super GT, while the character most likely drives a Turismo, as it is the car parked in front of Bernie's house. At the climax of the mission, the Russians hit a curb and crash their car, forcing you to get out of your Turismo and take them out on foot. Once they are dealt with you can steal the Super GT for yourself and save it. For its paintjob, it has a deep metallic version of one of five colors: gray, blue, red, green, or pink, all of which are unique. It may or may not come with a hood ridge.

Another Super GT is also obtainable outside in the mission "Trespass", being located at the main entrance of the abandoned Sprunk factory where you must find and kill Chubby Charlie. However if you complete the mission, and do not collect the car, it will disappear.

As a part of text message car missions from Stevie, he will ask you to procure one parked in front of the "69 Exchange" in The Exchange, Algonquin. Before taking it to Stevie's garage, save it in one of your parking spots and wait for another to re-spawn. Then take the re-spawn to Stevie. 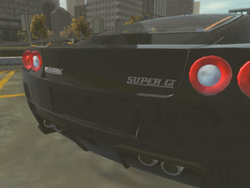 The Super GT in GTA IV is notably rare, being mostly available in specific missions (see #Prominent appearances in missions or Multiplayer modes, or by using a cheat code:

Retrieved from ‘https://www.grandtheftwiki.com/index.php?title=Super_GT&oldid=415928’
Categories:
Cookies help us deliver our services. By using our services, you agree to our use of cookies.