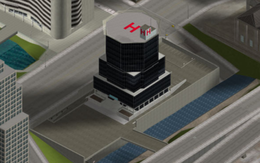 The police station has several entries, the first is on the right (according to the map and your location) where you can enter a vehicle or on foot, the second is to the south, which is made by stairs. The third entrance is located to the left which can be accessed via a ramp that is located next to City Hall, which leads directly to the back of the commissary where you can find several police vehicles. In GTA LCS once and have access to Staunton Island at times appear a helicopter on the helipad of the abyss of this building, because this police station is located in a place dominated by the Yakuza are often see problems between police and gangs. The only role that is highlighted during a mission in the mission Kanbu Bust-out in GTA III, where Claude will have to plant a car bomb in the cells of the Commissioner (in the rear) to free a prisoner.

Retrieved from ‘https://www.grandtheftwiki.com/index.php?title=Liberty_City_Police_Headquarters&oldid=379324’
Categories:
Cookies help us deliver our services. By using our services, you agree to our use of cookies.