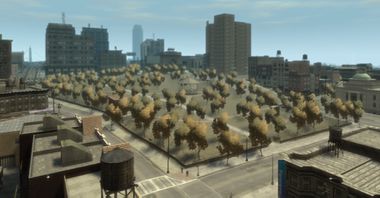 Outlook Park, seen here in GTA IV, is the centerpiece of Outlook.

Outlook is a small neighborhood in central Broker, Liberty City, centered around its namesake public park, Outlook Park. It is bordered to the north by Earp Street (Downtown), to the west by Oneida Avenue (Rotterdam Hill, East Hook, and Hove Beach), to the south by Gibson Street (also Hove Beach), and to the east by Montauk Avenue (South Slopes).

Outlook's residential area is bisected by the park and, as a result, both sub-areas have developed their own characters. The western part, along Oneida Avenue, has more of a trendy, hip vibe, almost certainly due to the street being the main drag of the area. The sense one may have while walking through this portion of the neighborhood almost completely contrasts the feeling one would have traversing through the lively Downtown district to the north. This portion of Outlook can be seen almost as a southern extension of Rotterdam Hill, also bordered to the north.

The eastern part of Outlook, along Montauk Avenue, is much more busy and fast-paced, however. This is likely due to Montauk Avenue's status as a thoroughfare, seeing much more traffic shuffling from neighborhoods to the north to areas in the south and vice versa. Indeed, in comparison to Oneida Avenue's small duplexes, brownstones, and small specialty shops, Montauk Avenue almost exclusively contains taller apartment complexes tailored for the more affluent residents of Broker. In addition, Montauk Avenue is also home to many of Broker's government and other authoritative buildings. 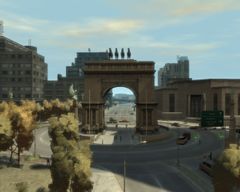 Soldier's Plaza in GTA IV, consisting of an arch centered around five columns, is located on the northeast end of the neighborhood. The building to the right is similar to the Brooklyn Public Library in appearance and location to a similar arch.

The Liberty City Subway does not serve Outlook; however, there is a station only two blocks away on Sundance Street from the neighborhood's eastern border in neighboring South Slopes.

Retrieved from ‘https://www.grandtheftwiki.com/index.php?title=Outlook&oldid=399620’
Categories:
Cookies help us deliver our services. By using our services, you agree to our use of cookies.