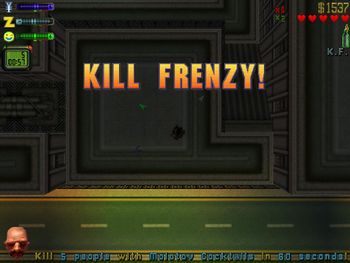 A Kill Frenzy screen in GTA 2.

Most of the tasks have the player kill a certain amount of gang members, run over pedestrians, perform drive-by's on gang members/vehicles or destroy a certain amount of vehicles. Suitable weapons are given for each rampage. In GTA San Andreas the rampages are always 2-player vehicle based. The first player drives the car, while the second one does drive-bys the other vehicles.

In GTA III, if the player fails a rampage on the first attempt, a second location for the very same rampage is present. If the second location is failed then the rampage returns to its original place.

In GTA Chinatown Wars, there are 30 rampages, which involve killing gang members with a given weapon. Unlike previous games, the player is given henchmen to help kill enemies. Score multipliers are given for consecutive kills. Instead of there being a number of people you have to kill, the rampages work on a score basis, awarding the player a bronze, silver or gold medal. Bronze medals must be won on all rampages to obtain completion. On top of the 30 rampages, there are also five Riding Shotgun missions, which fall under the same ingame category.

In GTA V, there are 5 rampage missions, which involve Trevor killing a specified number of enemies within a time limit. For each rampage, Trevor has unlimited ammunition for a specific firearm as well as 25 Grenades. There are also secondary objectives such as destroying a minimum number of vehicles, attaining a minimum number of headshots, and killing a set number of enemies beyond the target score. During the rampage, Trevor enters "rage mode" automatically, reducing the amount of damage received. This "rage mode" is independent of Trevor's special ability, allowing the player to activate it to further enhance damage dealt and received. After successfully completing a rampage, the player can replay it via the "Replay Strangers and Freaks" menu; alternatively, after completing all 5 missions, the icons appear on the map while playing as Trevor. Also, after completing all 5 rampages, the player earns the "Red Mist" achievement/trophy.

Retrieved from ‘https://www.grandtheftwiki.com/index.php?title=Rampages&oldid=413548’
Categories:
Cookies help us deliver our services. By using our services, you agree to our use of cookies.