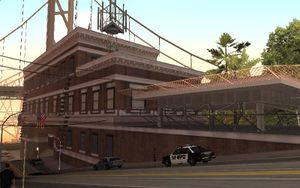 San Fierro Police Headquarters is the main building of the San Fierro Police Department, located at the southeastern corner of Downtown, San Fierro. The building rests on the side of a steep hill and houses a helipad on its northwestern corner, which is only meters above the street. The cable car runs adjacent to the building and the streets and sidewalks are filled with vehicular and pedestrian traffic.

The building is inaccessible to the player, and only stands as a site for re-spawning after being busted, and as a player in an important piece of the game's storyline. There is an active interior for the building that is only accessible through the interior universe.

After arriving in San Fierro to find his newly acquired Doherty garage to be abandoned, Carl Johnson sets out to turn it into a successful business with his new friends: The Truth, Dwaine, Jethro, and Zero. Along the way to pick up Zero, The Truth has Carl stop directly in front of San Fierro Police Headquarters to monitor the activities of a mysterious van moving through Downtown. After admonishing the other passengers to "picture a pink golf ball" in their minds, The Truth urges Carl onto the next stop.

As Carl is building his entrepreneurial skills in San Fierro, he begins to seek out the members of the Loco Syndicate responsible for the events leading up to this point. As he does so, he uncovers the truth about Mike Toreno and his hired muscles, T-Bone Mendez and Jizzy B. After killing Jizzy in a high-speed chase near the Gant Bridge, Carl, with Cesar's help, locates the meeting place of the remaining Loco Syndicate members and of his former ally, Ryder, on Pier 69. After blowing his cover, Carl chases down and kills both T-Bone and Ryder. Because of the commotion, Toreno's inbound chopper is meantime turning tail and heading off to an unknown location. Soon enough, Carl learns that the chopper is leaving from Downtown. He rushes there to find the chopper taking off from the roof of San Fierro Police Headquarters. He climbs the helipad, grabs an available rocket launcher, hunts down the helicopter using a motorcycle, and blows it out of the sky.

Retrieved from ‘https://www.grandtheftwiki.com/index.php?title=San_Fierro_Police_Headquarters&oldid=347760’
Categories:
Cookies help us deliver our services. By using our services, you agree to our use of cookies.