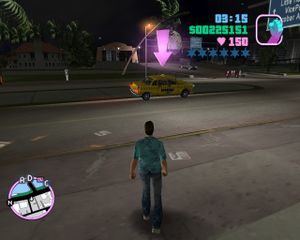 A Kaufman Cab in GTA Vice City waiting in front of a hospital to take the player to the trigger that activates the last mission the player attempted, after the player failed the mission by dying.

Taxi rides refer to an ability in the Grand Theft Auto series to travel to parts of a city by riding a taxi, as opposed to stealing and driving one. The feature is effectively a form of "teleportation" that allows the player to reach nearly all destinations without the hassle of traveling on their own.

The ability to ride taxis was first featured in a limited scale in GTA Vice City as merely a mean to repeat failed missions if the player is arrested or killed in one; after respawning at a hospital or police station, a marked Kaufman Cab is spawned in front, which can be ridden to the marker that activated the failed mission, allowing the player to replay the mission faster. A taxi ride in GTA Vice City cost $9 per use.

Players could only begin hailing for and entering a taxi at will, and taking taxi rides to nearly all destinations all at a variable cost, in GTA IV.

While on foot, the player can whistle for a cab, and, provided he is not wanted by the police, take a seat in the back and be driven anywhere in the city for a fee. It should be noted that entry into a taxi as a passenger is only possible if the player presses and holds the button or key used to enter vehicles (as opposed to simply pressing it); otherwise, the player ends up carjacking the taxi driver instead.

Cabs that already have passengers will not normally stop when hailed; this may trigger the player to comment on it unsavory. If the player manages to catch up to an occupied taxi, however, it can still be entered - the player will pull the passenger out of the back seat and hop in. Passengers do not retaliate, and there is no Wanted penalty or reaction from the driver. This is usually easier to execute when the taxi is either traveling at low speeds or is stationary (i.e. stopping near an intersection).

The taxi fare is determined by distance, and whether the player used the "trip-skip" option (where the journey is omitted entirely, the game resuming as the cab pulls up at its location, and the cost of the fare doubling). The player can also issue a "hurry" option, which allows the driver to drive aggressively and ignore road rules, without additional costs. If the player acts aggressively or receives a wanted level while riding in a taxi, the driver will stop the car and run away in fear.

The player can get free cab rides from Roman Bellic after the mission Bleed Out and after the player attains 60% friendship (Roman will call to inform the player once the service is available). Selecting "Car Services" from Roman's address-book entry in the mobile phone will initiate a call to Roman, and he will dispatch one of his cabs driven by Mohammed to the player's location. In the beginning of the game, Roman's taxis are customized dark gray Esperantos (see Roman's Taxi), but as his fortunes rise, his company switches to using dark gray Cavalcades. Cabs sent by Roman can still be used even if the player has a wanted level and can still be shot out of without scaring the driver. The cabs cannot be requested for back-to-back rides, as Roman will indicate there are no cars available. The service is unavailable between the missions Roman's Sorrow and Blow Your Cover due to the destruction of the garage; a text message received from Roman soon after the conclusion of the latter mission reactivates the service. 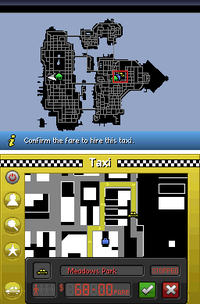 In GTA Chinatown Wars, players retain GTA IV's taxi riding system, with several changes in place. Players can no longer enter any Cabbie at will, as they can only be entered after the player hails a taxi, triggering the taxi to stop and be marked by yellow chevrons pointing where the player should walk to to automatically enter a taxi as a passenger.

After entering a Cabbie, the player, as in GTA IV, can pick nearly any location in Liberty City to go, as are the usual gameplay-specific locales. Instead of a basic destination selector, however, the player is automatically shown a map of the city, allowing the player to immediately pinpoint their destination using a map marker. After selecting a destination, the player is treated with a similar cutscene of the taxi the player is in traveling towards the destination, which the player can skip.

Like GTA IV, the cost of a taxi ride is dependent on the distance of the ride; the longer the ride, the costlier it is.

Retrieved from ‘https://www.grandtheftwiki.com/index.php?title=Taxi_Rides&oldid=378616’
Categories:
Cookies help us deliver our services. By using our services, you agree to our use of cookies.