You may be looking for Cabby, a minivan taxi in Grand Theft Auto IV.

The Cabbie is a Checker Marathon-based four-door taxicab that has appeared in the following games:

The Cabbie is based on a 1956-82 Checker Marathon taxi; it is presumably based on the '70s and '80s models, considering the games' timelines, however its single headlights are reminiscent of the 1956 Marathon.

There are minor cosmetic differences between Cabbies in each game:

The Cabbie is generally slower and heavier than its more modern counterpart, the Taxi. Its handling is also inferior; the vehicle is somewhat unstable under heavy cornering, and its wobbly suspension can make it prone to rolling over, especially when driving at high speeds. These factors make the Cabbie a poor choice for the taxi side-mission, where speed is critical. Some players, however, favor its rear-wheel drive, which is more capable of powersliding in corners. But if the player knows how to control it, its large V8 engine can help you get in a fast getaway. And it is also a good car to actually go off roading, just it can't run over everything.

In Grand Theft Auto: Chinatown Wars, the Cabbie returns as the sole taxi. Its performance has been improved. Acceleration is acceptable and so is handling. These factors make the Cabbie a good car for evading police (i.e ramming police cars).

The Cabbie in GTA San Andreas can be modified at a TransFender, but is only offered a bare minimum of modification options: 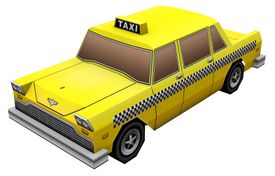 A rendering of the papercraft Cabbie from the GTA Chinatown Wars section of the Rockstar Games Social Club.

In many cases, Cabbies are only available as part of city traffic, and are not frequently parked in specific locations. However, at least two of the games do spawn Cabbies in set locations:

Retrieved from ‘https://www.grandtheftwiki.com/index.php?title=Cabbie&oldid=375228’
Categories:
Cookies help us deliver our services. By using our services, you agree to our use of cookies.