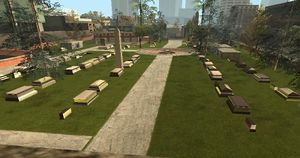 The Vinewood Cemetery is a cemetery that is located in Vinewood, Los Santos. The Cemetery is featured a few times throughtout the game. It first appears in Sweet & Kendl where Ryder, Big Smoke, Sweet, and Kendl, are all mourning the death of Beverly Johnson, the mother of Sweet, Kendl, Carl, and Brian. At the end of the funeral, the gang minus Kendl, are leaving the cemetary, when the Ballas show up in a red Voodoo and are trying to kill Sweet, however they end up destorying Big Smoke's car, prompting the gang to flee with BMX's and head back to Grove Street. Later in the storyline, Carl Johnson killed Little Weasel, and he was having his funeral today, and because Little Weasel was a high ranking member, many important Ballas members are going to show up at the funeral, including Kane. So in the mission Los Sepulcros, Sweet has a plan to sneak over the wall in the back of the cemetary, and kill Kane and the other Ballas memebers, as revenge for what the Ballas did to Beverly's funeral. It is loosely based on the Hollywood Forever Cemetery.

Retrieved from ‘https://www.grandtheftwiki.com/index.php?title=Vinewood_Cemetery&oldid=409853’
Category:
Cookies help us deliver our services. By using our services, you agree to our use of cookies.